The 2017 edition of my Père-Lachaise Guide is now available

The 2017 edition of my Guide to the Art in Père-Lachaise is now available.

You can find it right here.

If you have an older edition I'll send you the new edition free of charge -- just tear off the cover and send it to:

Be sure to include your mailing address, si vous plait! Oh, and the map I created to go along with the guide has also been updated and you can find it online right here.
Posted by Steve Soper at 2:58 PM No comments:

Sculpted by Clément Leopold Steiner, and once located in what was called Square Père-Lachaise, now Square Samuel de Champlain, overlooking Avenue Gambetta, this touching, and somewhat melancholic statue was removed many years ago.

The good news is that Adam Roberts of the Invisible Paris blog has tracked down the story behind the statue and what became of it.

Located not far from where Paul Moreau-Vauthier's Memorial to the Victims of Revolution now stands. 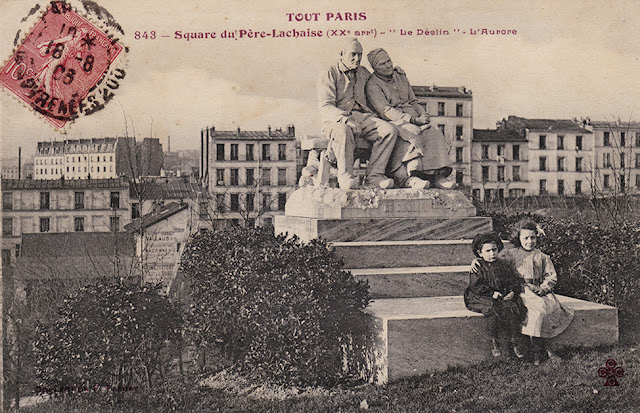