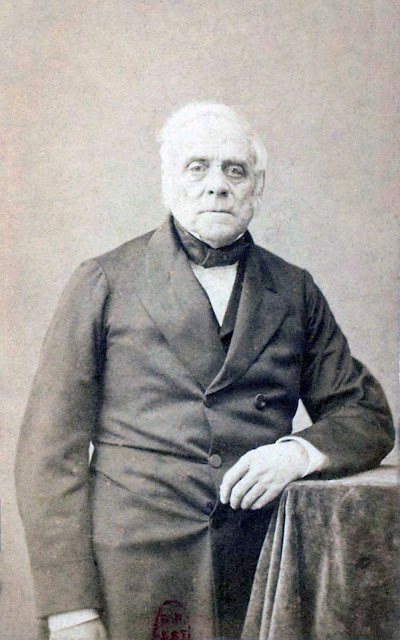 Stephen Sharnof's "Restless Peace" is a stunning collection of photos taken in several Paris Cemeteries, images intermixed with touching epitaphs and hints of life stories long passed away into dust. The eery fact that the book's mood grew directly from his own sense of sorrow and anguish at the loss of his wife make it even more touching.

But there are several nagging problems.

One is the book's layout. Sharnoff tells us that the book is designed according to certain themes. Fine. But his themes, as noted in the Table of Contents, don't flow well -- at least form my point of view. The chapter called "Loss and Mourning" makes little sense to me -- we are after all in a cemetery where loss and mourning is everywhere. And what does "First Views" mean exactly? or " Paris Responds," both seem somewhat confusing as their respective intent.

On the other hand, other chapters make very clear sense since they fit tomb styles: "Fragments" (one of his most touching sections) and"Stained Glass," although at the end of the latter his places a reference and quote from Philippe Aries near the end for no apparent reason. I also get "Beauty and Humor." But why not add a brief paragraph or two introducing and explaining each "theme" or section? anything that gives the reader an idea of what the author is driving at in providing us a glimpse of such powerful imagery.

The author does warn us that this is not a guidebook and I'm certainly fine with that. But I'm a bit perplexed by his overall structure nonetheless. Let me explain.

While his early section on epitaphs are incredibly moving, they bear little relation (as far as we're told) to any specific grave or cemetery. also he has a brief somewhat disjointed introduction to Pere-Lachaise but doesn't mention any other cemetery in detail.

This raises my second issue. Some graves are mentioned by name, while most are not. We have no idea which cemetery they're located in or any other details for that matter. In fact, the title notwithstanding, most of these images could have come from any one of a dozen major European cemeteries.

Yet, on the one hand, he's eager to share the graphic poignancy underlying a certain grave but then doesn't follow through on the rest of the story.

His approach is an unsettling hybrid of stream-of-consciousness with the occasional glimpse of order and structure. It's neither one thing nor the other.

Third, and related to the second issue, there are several simple mistakes that could only have been resolved with a more detailed understanding of the graves he photographed.

1. The photo his lists as "Baudelaire's grave" on pp. 187-88 is in fact a cenotaph to Baudelaire who is buried with his mother and step-father in division 6 Montparnasse grande (the cemetery itself isn't even mentioned).

2. The photo listed as Charles Lafont is not Lafont at all but Ferdinand Arbelot buried in division 11 Pere-Lachaise; Lafont is nearby in division 12. He did get the epitaph for Arbelot correct, however.

4. For some odd reason the text color changes occasionally and for no apparent reason; sometimes black, sometimes brown.

5. The quality of the paper used is not photo quality undermining the value of this work as a "photo book."

Lastly, I wonder how many and which cemeteries Stephen did visit. From what I can see he paid close attention to Pere-Lachaise, Montparnasse grande, and Passy, but did he visit Montmartre, St. vincent, Picpus, or the Pantheon, Invalides? We don't know.

This is a pleasant book to pick up and open to just about any page and simply appreciate the photography at face value -- but it is little more than that. The author hints at things he might have wanted to do -- and his extensive research on the epitaphs are just one example of where this could've gone -- but there is little meat here to hold the attention or inspire one to track down such beautiful sculpture.

More than 1.5 million people visit Pere-Lachaise each year. According to a recent survey on Trip Advisor the cemetery ranks no. 24 out of 557 attractions in Paris. Stephen does warn us his work is not a guidebook but is it not inspirational? If you were planning a trip to Paris would you not want to track down and see for yourself if not photograph some of that fantastic artwork?

At the very least he should have provided a modicum of information on each photo -- if nothing else he could have at least told us where each photo was taken and, preferably, whose grave it was as well. iIf he didn't want to interrupt his flow of visual thought, he could have done that in a list of photo credits at the end of the book.

There are so few books on Paris cemeteries available in English that I would have loved to give Stephen's book a glowing review. Sadly, I cannot.
Posted by Steve Soper at 11:00 PM No comments:

While it may be quietly argued that these two are simply preparing to open the door for you, I like to think they are actually reaching out for each other. What do you think? 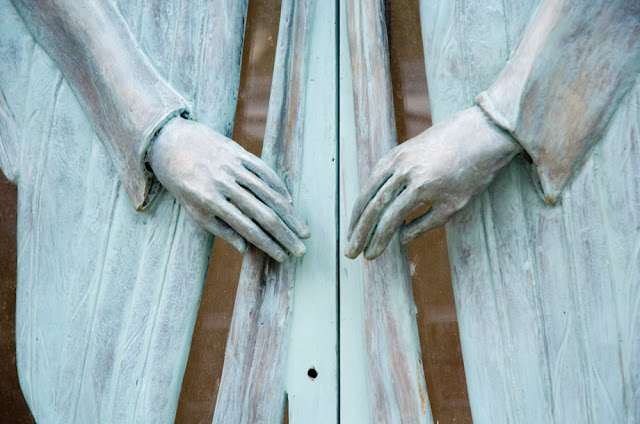 Posted by Steve Soper at 8:52 AM No comments: 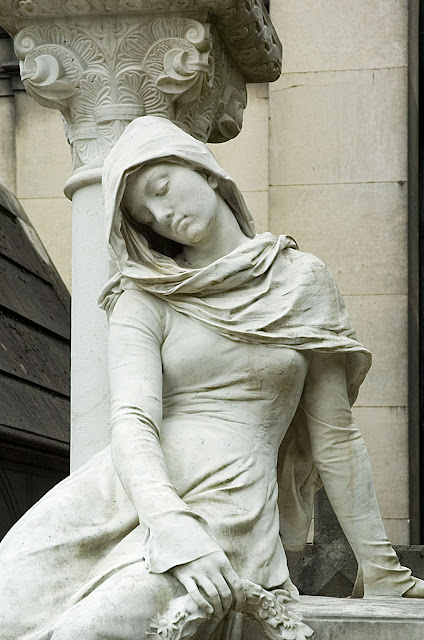 Posted by Steve Soper at 8:51 AM No comments:

What's curious about this particular young woman is that she doesn't appear sad at all,  only contemplative. It's as if she's waiting for a bus whiling away her time thinking about someone or something of interest. 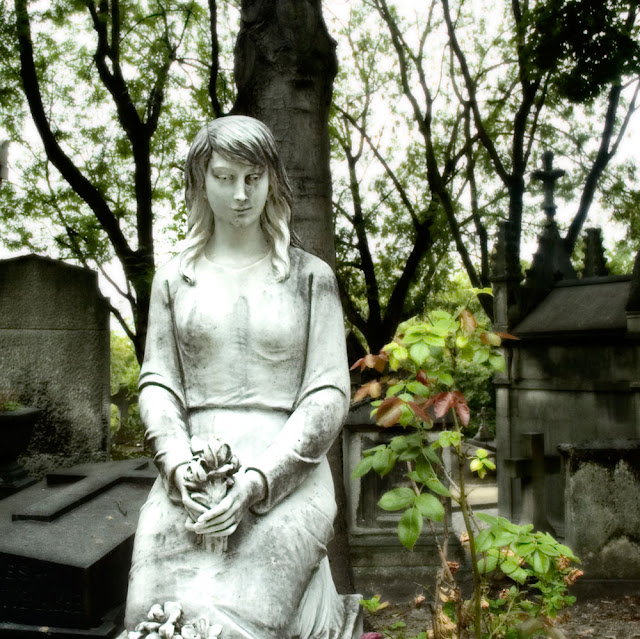 One of the more striking, unique and puzzling sculptures in Pere-Lachaise. Appearing to be half-finished it has always struck me as the woman is coming out of (or disappearing into?) the stone. Either way, I find it most engaging -- and continue to wonder just who was this most curious "Reifenberg". . . 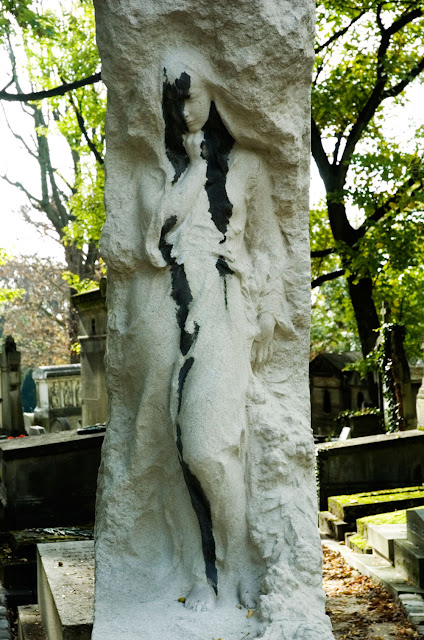 Posted by Steve Soper at 8:50 AM No comments:

Owner of one of the more well-known Paris foundries for casting sculptures, bust by Chapu and statues by Boucher. 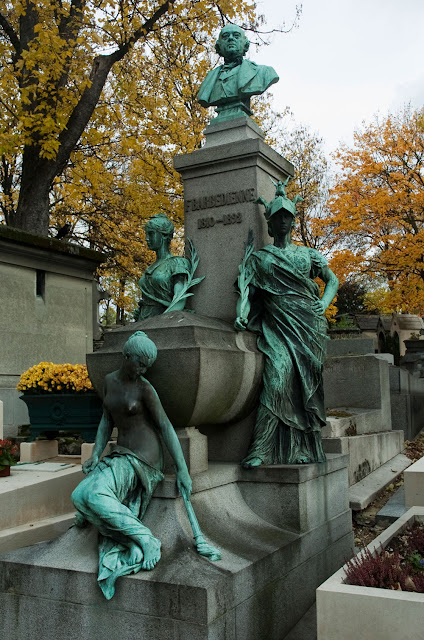 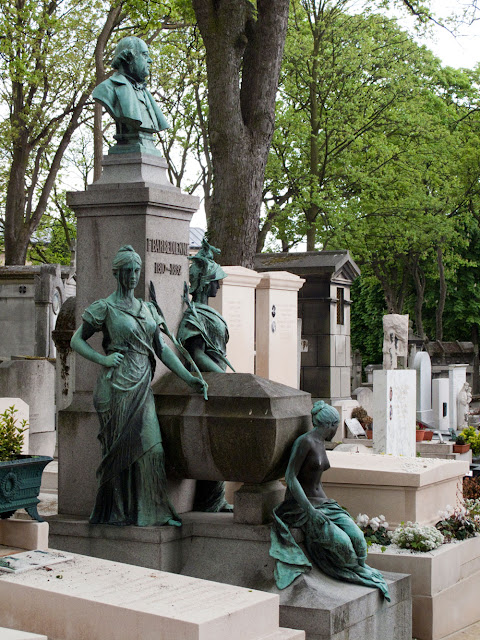 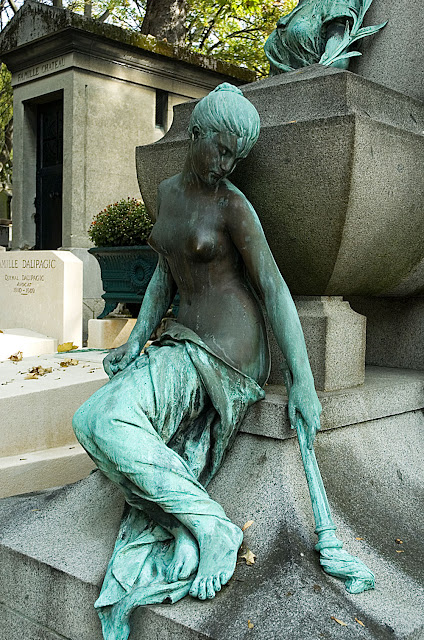 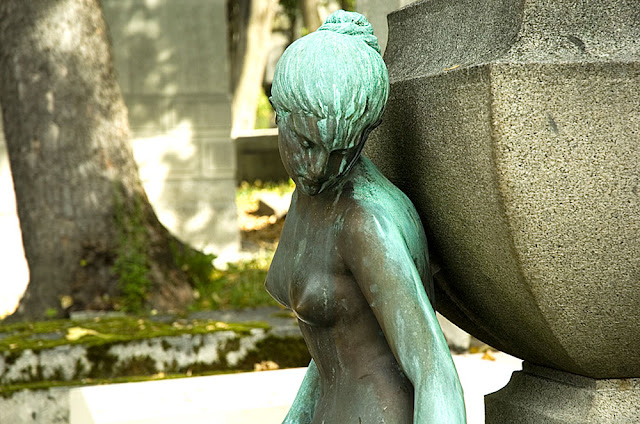 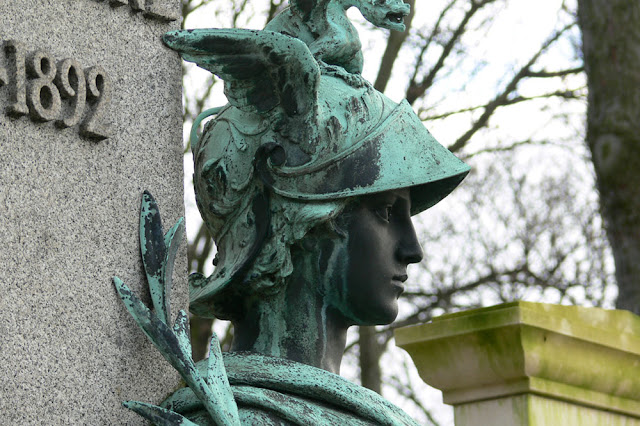 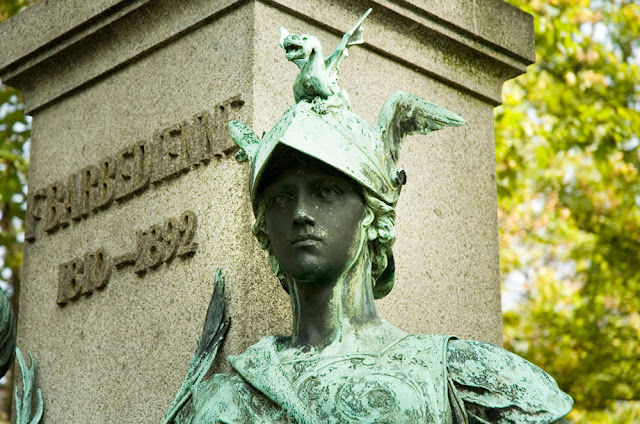 Marc's widow, Victor's mother Victoire, is buried just across the chemin in division 49. 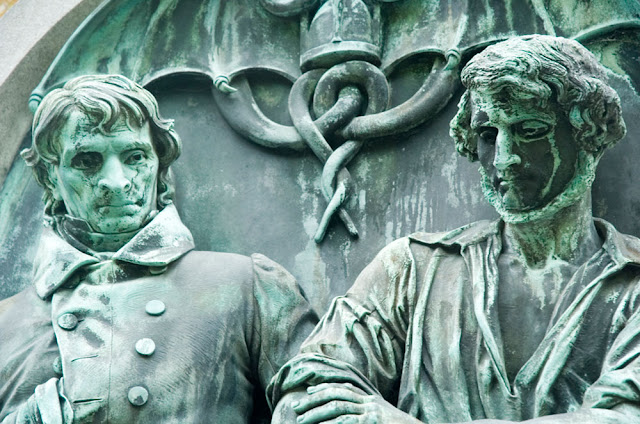 Posted by Steve Soper at 8:49 AM No comments:

The widow of Marc and mother of Victor, both of whom were originally interred nearby in division 50 but whose remains were transferred to the Pantheon. 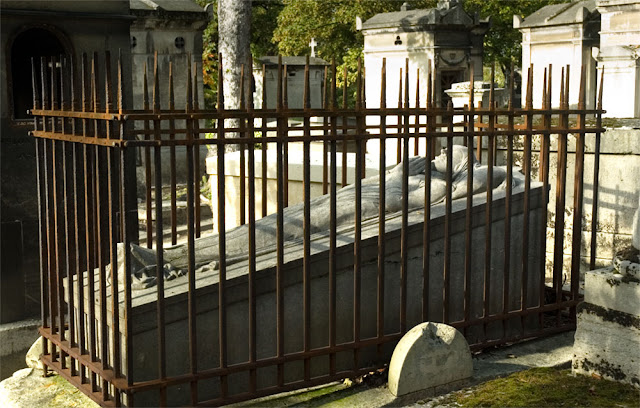 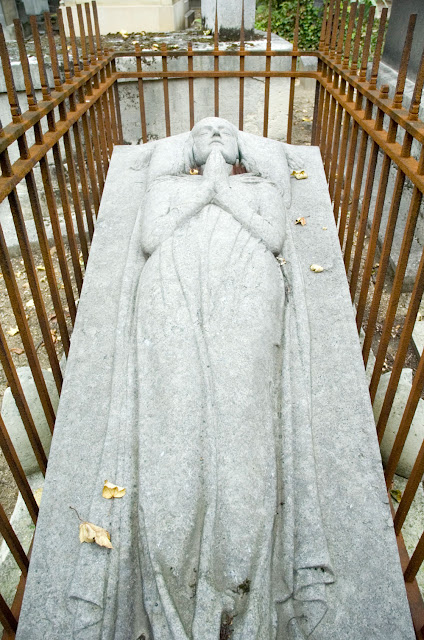 Posted by Steve Soper at 8:34 AM No comments: 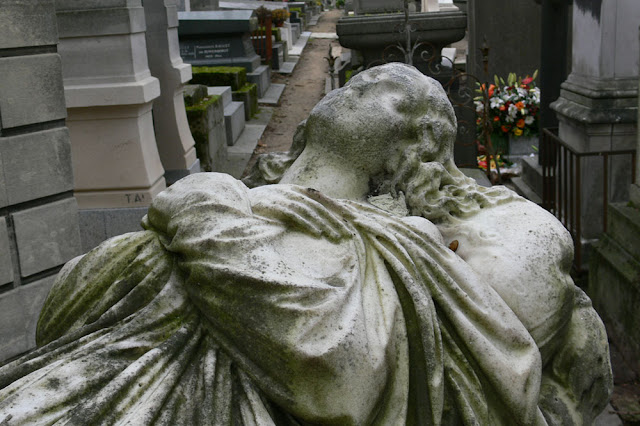 Posted by Steve Soper at 6:56 AM No comments:

She was also known as Vicomtesse de Chatiloff. (The statue group is now behind glass.) 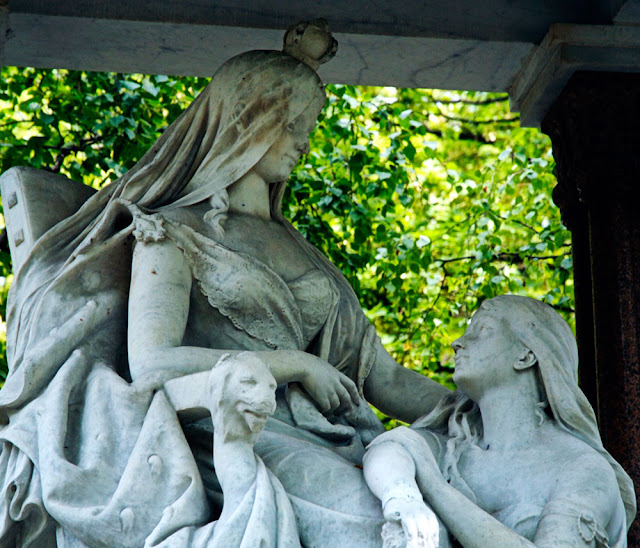 Posted by Steve Soper at 8:31 AM No comments: 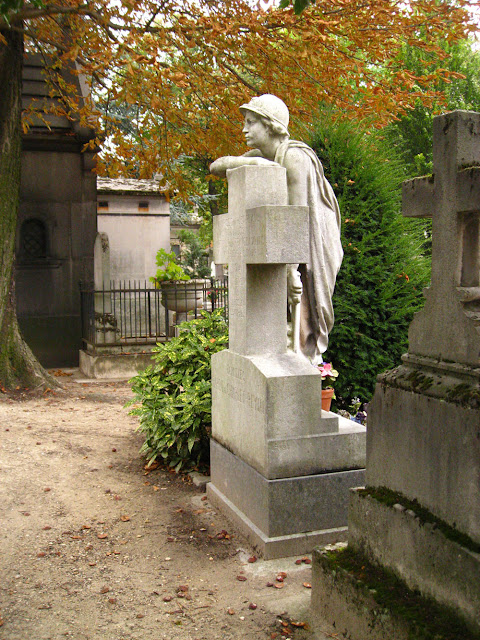 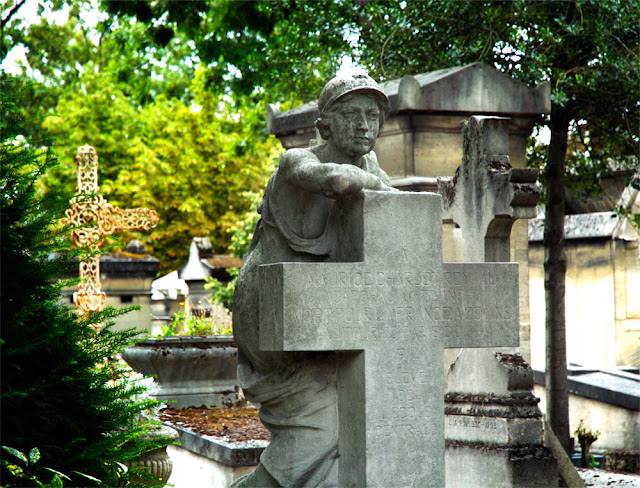 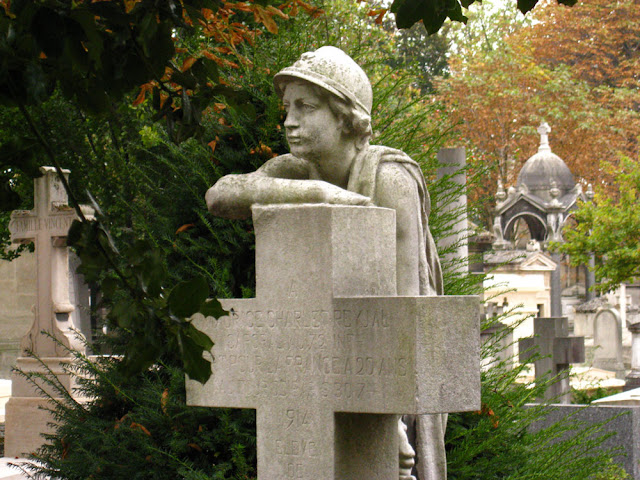 Posted by Steve Soper at 6:55 AM No comments: 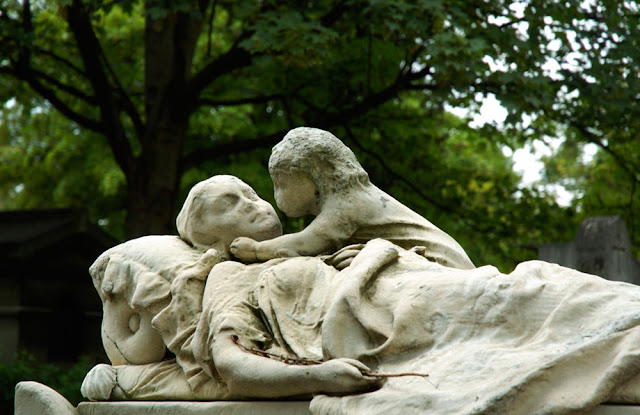 Posted by Steve Soper at 6:54 AM No comments:

French sculptor, primarily of religious themes. This haut-relief bronze sculpture by Henry Triqueti was to honor his only son Edouard, who was killed in a horse riding accident in 1861. It represents Jesus raising Lazarus from the dead. 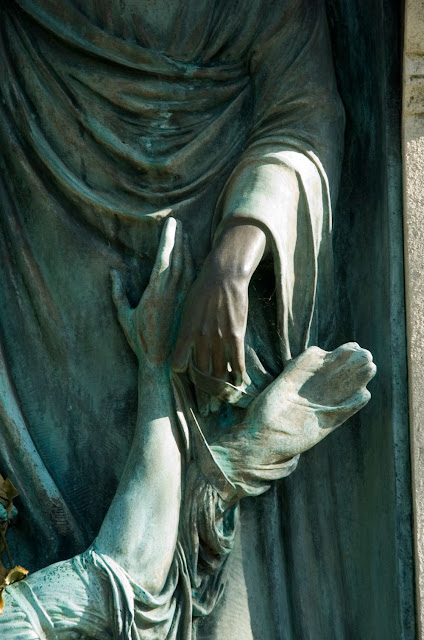 Posted by Steve Soper at 6:54 AM No comments:

French Sculptor. Sculpture by Louis Moris; in the background of the first image is a bas-relief of Agathe Moris (died 1825). 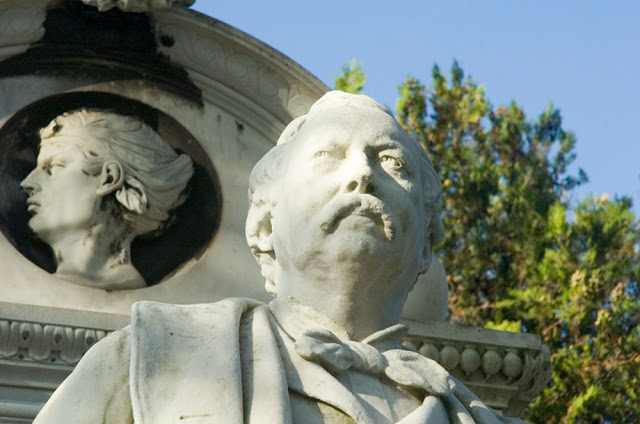 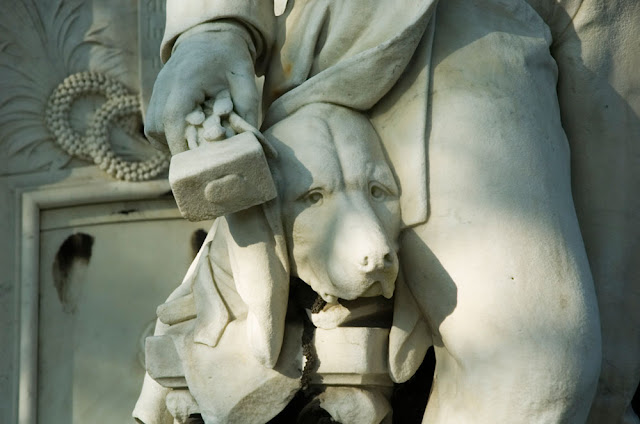 Posted by Steve Soper at 6:53 AM No comments: