Posted by Steve Soper at 3:35 PM No comments:

In 2012 the official Paris city website reported that more than two million people visit Pere-Lachaise Cemetery.  TripAdvisor, one of the most popular travel websites, recently ranked Pere-Lachaise as the 30th most popular of 616 Paris attractions reported by reviewers. Yet the absence of an English-language guide to Paris cemeteries has been a serious gap in travel resources for the City of Light.

The few English-language books on the subject have been either singularly focused on one cemetery or theme with little helpful information or self-indulgent exercises in how not to help travelers find their way through the maze of Parisian dead. In fact, not since 1986, when Judi Culbertson and Tom Randall produced their engaging but rather flawed Permanent Parisians, has anyone thought to write a serious work on the cemeteries of Paris.

Doug Keister's Stories in Stone Paris: A Guide to Paris Cemeteries (Gibbs Smith 2013) is packed full of handy information, fascinating stories and a wealth of detail neatly arranged and easy to use. He has also put Parisian burial practices in perspective with his seminal work on funeral symbology -- a nice addition as well.

I first discovered Doug Keister's work on cemeteries in 2006 when I came across a friend's copy of Stories in Stone: A Field Guide to Cemetery Symbolism and Iconography. It quickly became my primary resource whenever I had a question about the unusual, enlightening and often arcane symbols found on tombstones. Stories in Stone is one of those critical guidebooks that any serious cemetery traveler must have in her library. Keister's grasp of his subject was matched by his engaging writing style and thoroughness of research.

Keister's initial field guide was followed up by the successful and equally fascinating Stories in Stone: A Field Guide to New York City Area Cemeteries & Their Residents. And now he has crossed the Atlantic to bring us his unique skill for finding the interesting and unusual in the cemeteries of Paris.

Relying on the expertise and invaluable assistance of local Paris cemetery expert Marie Beleyme, Keister's latest guide provides the traveler with an easy-to-use, very readable guide to the major Paris cemeteries. While one hopes to eventually see separate English-language guides to the Paris Big Three (Pere-Lachaise, Montparnasse and Montmartre), for the time being this work must be the English-language resource of record.

(Disclaimer: this reviewer is listed as a resource in Keister's Stories in Stone Paris: A Guide to Paris Cemeteries. He makes no apologies, however, knowing first-hand that Keister remains committed to being as accurate, helpful and informative as possible.)
Posted by Steve Soper at 7:02 PM No comments:

Ennius, father of Louis Visconti, both buried in division 4. 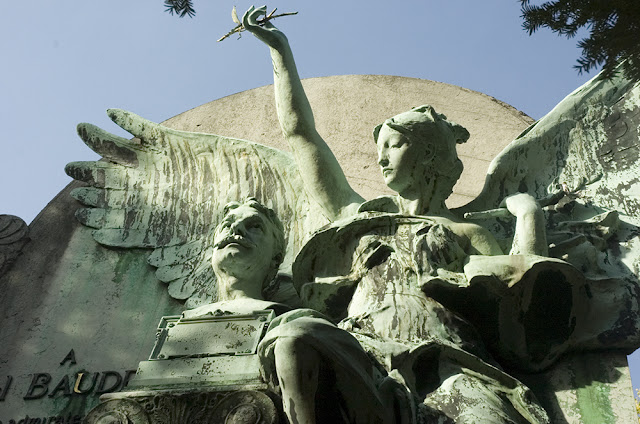 Posted by Steve Soper at 8:15 AM No comments:

This print, found online at delcampe.net, is looking across division 38 division 28 to the grave of Andre Massena (1758-1817), marshal of France. 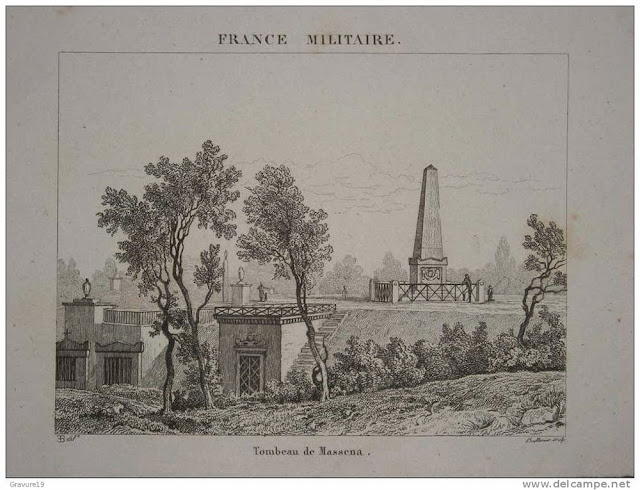 Posted by Steve Soper at 7:40 PM No comments: 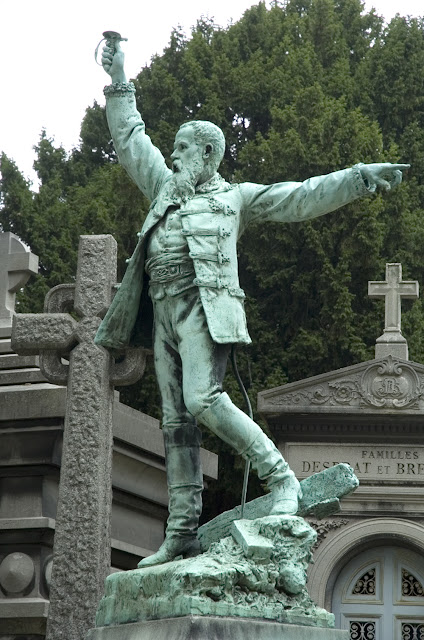 Posted by Steve Soper at 8:14 AM No comments: