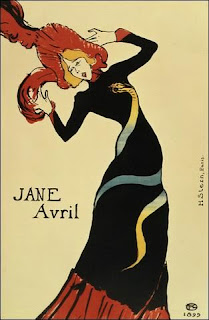 The bust of Rene Piavit not missing after all. Apparently the conservation at Pere Lachaise has instituted a policy of removing any unstable bust for safekeeping until they can be returned to the gravesite and affixed to the pedestal. A pretty good policy we'd say.

And speaking of missing busts the police have reportedly recovered most of the busts stolen from a number of Parisian cemeteries over the past several months. That's the good news; the bad news is that not all the recovered busts can be identified! It's always something!

I met up with Marie yesterday (Saturday) afternoon for a last stroll through the cemetery and to track down a couple of gravesites that have since eluded me: Preault in 49, Castiglione in 85 and Fresnel in 14. Marie found Preault for me and together we found Castiglione but Fresnel still remains that one elusive grave. . .

While waiting for Marie I caught sight of five young women just outside the cemetery entrance, four with devil horns on and one dressed like an angel with wings and halo; I have no idea what was going on here but they seemed very lively, happy and just out being goofy and enjoying life. 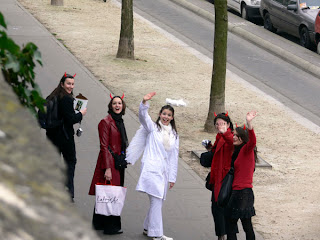 Not a bad way to go through life. And what better place than outside a cemetery to promote such a worldview, eh? 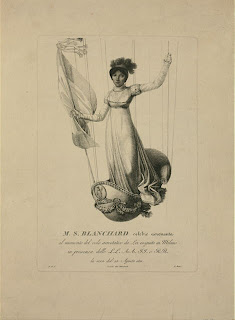 As Marie and I chatted and strolled through the cemetery I said let's swing through divisions 13 and 19 so that I could pay my respects to two of my favorite women: ballonist Sophie Blanchard (div. 13) and Moulin Rouge dancer Jane Avril (div. 19). (Photo top of Lautrec's poster of Jane.)

More than a century before there were barnstormers flying their biplane aircraft over county fairs in the United States, showing off their daredevil acrobatic skills, there were people in France doing pretty much the same thing but with balloons. In 1785 Jean-Pierre Blanchard and American Dr. John Jeffries were the first to cross the English in a ballown (they almost didn't make it). After Jean-Pierre died in a ballloning accident in 1809 his widow Sophie carried on the family tradition, becoming one of the first women aeronauts. During one show in 1819 her balloon caught fire from the fireworks and although sghe landed successfully on a nearby house, she was blown off the roof by a gust of wind and killed. Sophie was buried in division 13 of Pere Lachaise. (Photos left and below) 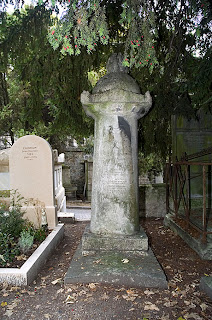 Jane Avril was one of the best known and in her day one of the most famous dancers at the Moulin Rouge in Montmartre as well as a number of other caberet shows. Jane replaced the incomparable Louse Weber (La Goulue) at the Moulin Rouge and became a sensation. She died in 1943 in a seniors' home in near poverty in 1943, largely unforgotten.

After we left the cemetery Marie and I met up with Philippe at a nearby cafe for coffee and later they took me next door to the 20th Arrondissement's Maire (city hall) across the street where the once-every-two-years' festival of associations was underway. Every organization, society and association in the arrondissement was out in force trying to persuade people to take a peek at what they had to offer the public and to consider joining. Naturally the Friends of Pere Lachaise had a booth as well. 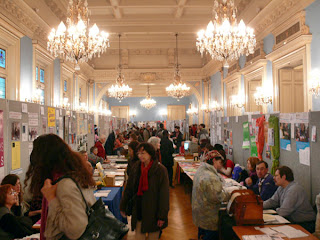 It was a wonderful afternoon and a grand way to spend my last tour in Pere Lachaise. I will miss Marie, Philippe and of course the quiet streets of Pere Lachaise.

Wish I was there,

Steve
Posted by Steve Soper at 12:56 AM No comments:

Marion from New York writes and asks if anyone has information on the burial location for her great-grandfather Michel Klos (or Klaus) and his family who lived just across the street from St. Saturnin church on rue Frileuse (then rue Charles Frerot) in the 19th century and are most likely buried in Gentilly cemetery.

Steve
Posted by Steve Soper at 12:14 AM No comments:

Well it's back to the same old story: another bust has turned up missing. This time it's Rene Piavit in division 89, close to the massive sculpture over Oscar Wilde's burial place: 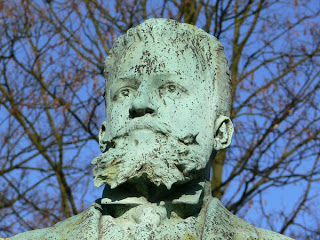 Well I just heard from Marie this morning and she received an email from Pere Lachaise saying that the thieves had been caught. The "theft ring" was a mother, son and daughter, who were apparently trying to sell the stolen busts and medallions at some of the, shall we say less-inquisitive antique dealers in Paris. marie said that details so far are sketchy but that thery recovered quite a few busts including Bizet.

The good news that the string of thefts of wonderful works of art has been brought to a halt, at least for the time being (we hope).

The question now is what will the city do about protecting all the busts in the cemetery in the future? Certainly one alternative would be to increase foot patrols of police and the cemetery wardens. Another, more effective but certainly more costly option would be to take one of the existing buildings in division 83 for example, presently used for administrative purposes, and turn it into an exhibition hall.

Steve
Posted by Steve Soper at 5:45 AM No comments:

Another missing bust in Pere Lachaise

Back in early January Marie informed me that the bust of French sculptor Eugene Delaplanche (1836-1891) was missing from division 96, and sure enough I noticed it myself this Saturday (3 March): 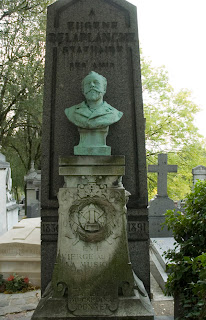 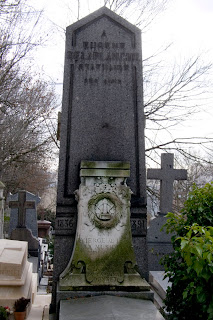 Steve
Posted by Steve Soper at 9:56 AM No comments: