And yet another mystery. . . 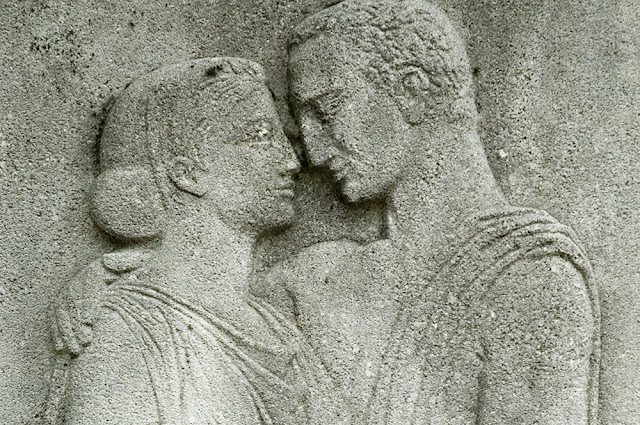 Posted by Steve Soper at 7:10 AM No comments: 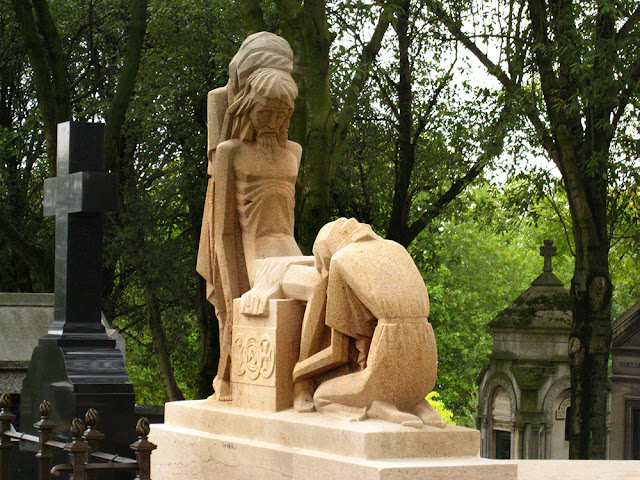 Posted by Steve Soper at 8:09 AM No comments: 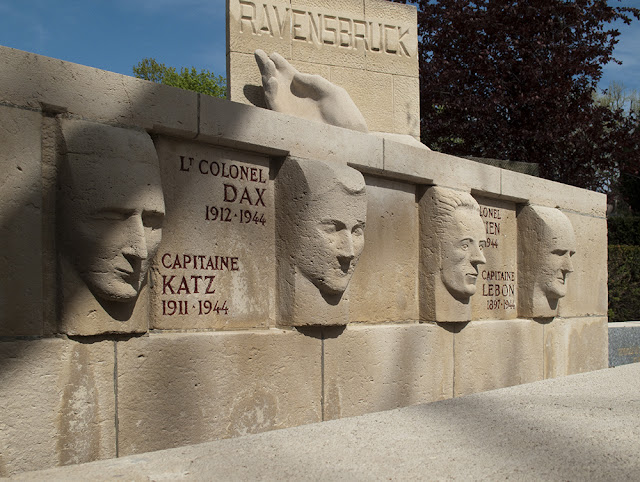 Posted by Steve Soper at 7:07 AM No comments:

Based on selections from my book Garden of Stone: 101 Incredible Sculptures of Pere-Lachaise, my photo exhibit at the Johnson & Wales University Library in Providence, Rhode Island, runs from September 26 to December 13. Since the library is not open to the public, I'm posting the photos included in the exhibition right here. President of France from 1895 until his death in 1899, his seemingly peaceful effigy belies the turmoil of the last years of his life, which saw his administration embroiled in the notorious Dreyfus Affair. Sculpture by René de Saint-Marceaux. 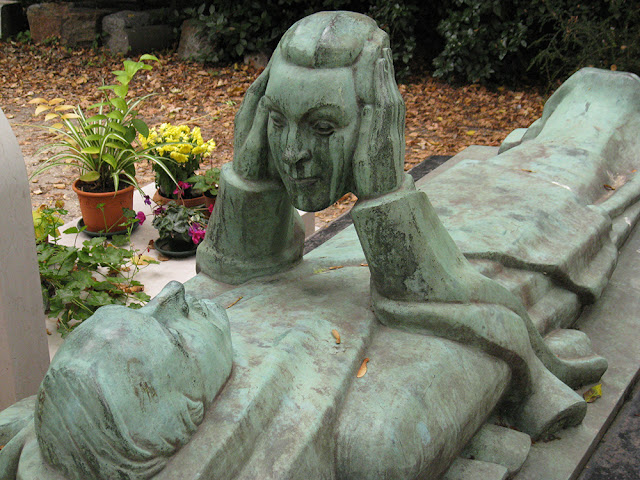 Little is known of Arbelot's life but perhaps his epitaph tells all we need to know:


Qui les mena jusqu'au bout de la vie.
"They were filled with wonder at the beautiful voyage/
Which carried them until the end of life."

Division 12, French painter Théodore Géricault (1791-1824). Sculpture of Géricault reclining with brush in one hand and his palette in another by Antoine Etex (buried in division 8 Montparnasse Cemetery). : 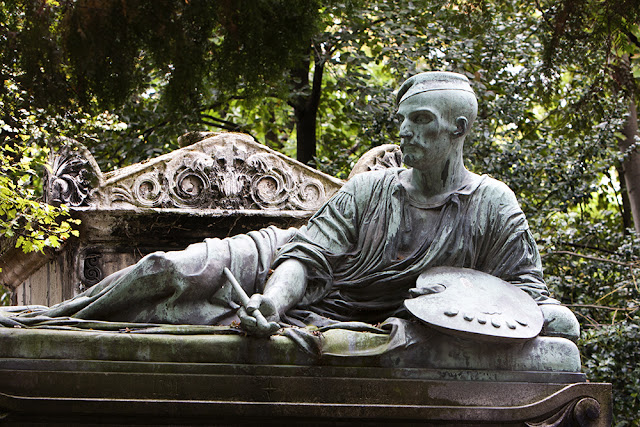 One of the pioneers of the romantic school of painting in France, Géricault is perhaps best known for his profoundly moving canvas, "Raft of the Medusa." Based on the story of one of the most horrific disastrous shipwrecks of the 19th century, the creation of the canvas is a tale all its own and one well-told by Jonathan Smiles in his masterful The Wreck of the Medusa (2007, Atlantic Monthly Press) 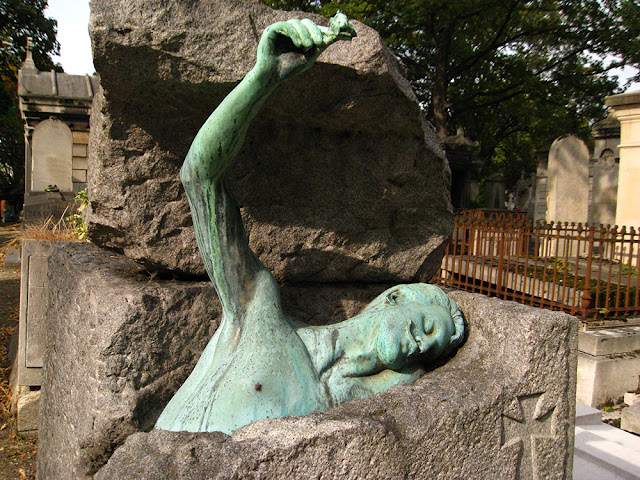 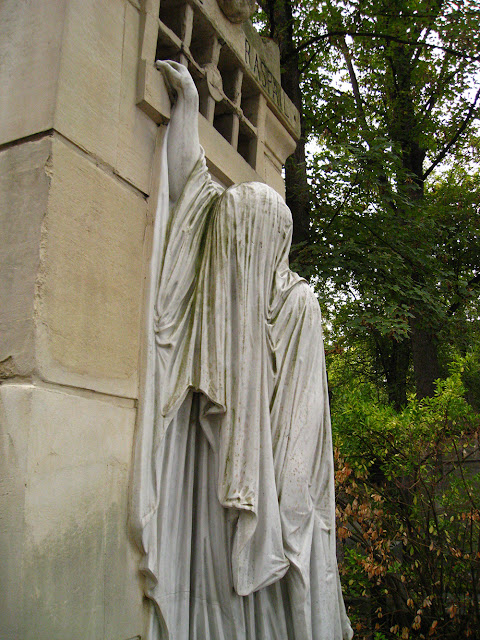 Francois Vincent Raspail was imprisoned during the reign of Louis-Philippe (1830-1848) and again shortly after the aborted revolution in 1848. It was while he was in prison that his wife died. Sculpture representing the spirit of his dead wife attempting to visit him in prison by Antoine Etex (division 8 Montparnasse Cemetery). 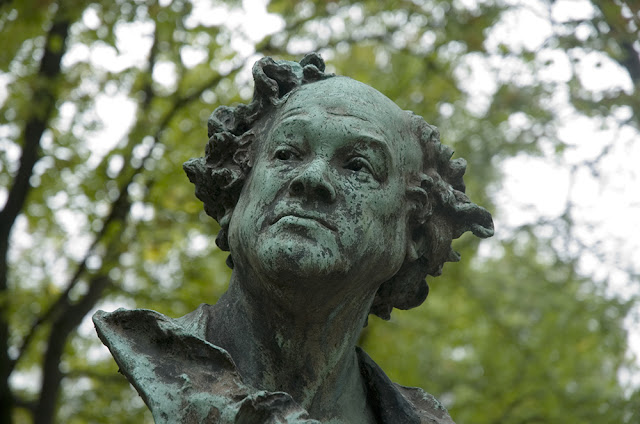 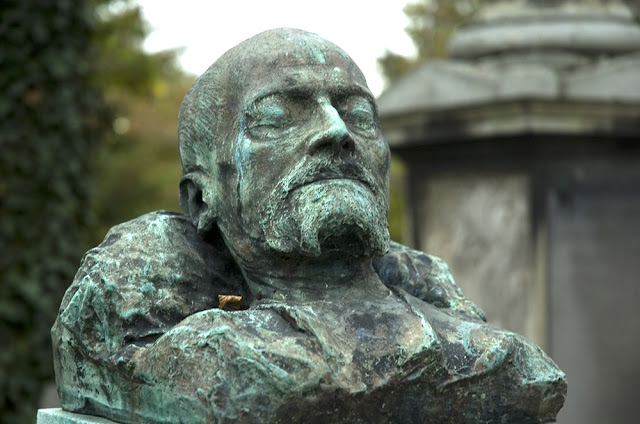 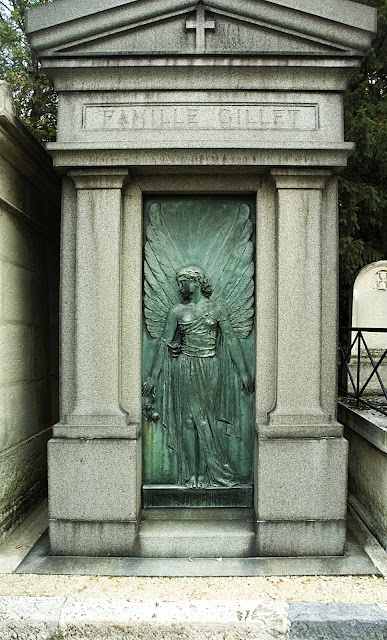 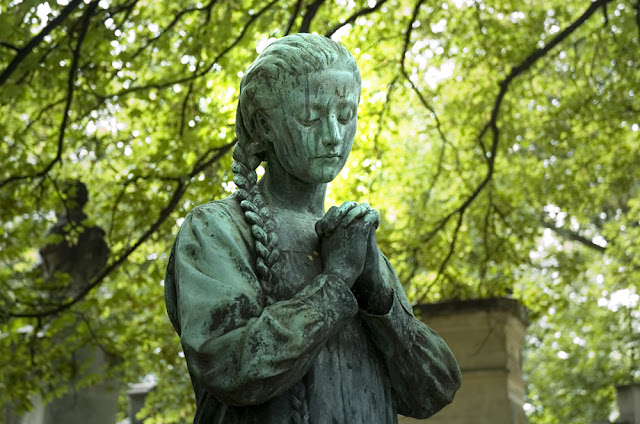 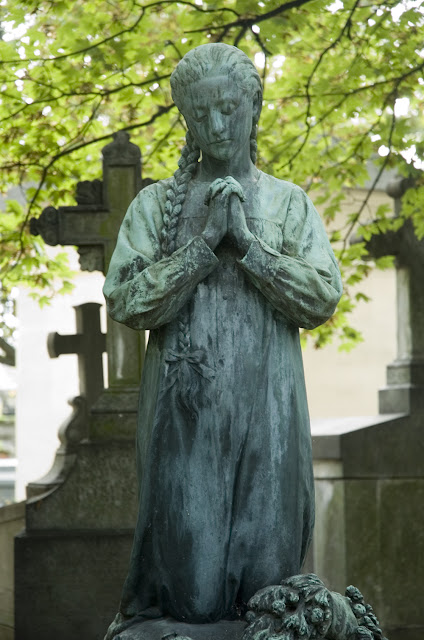 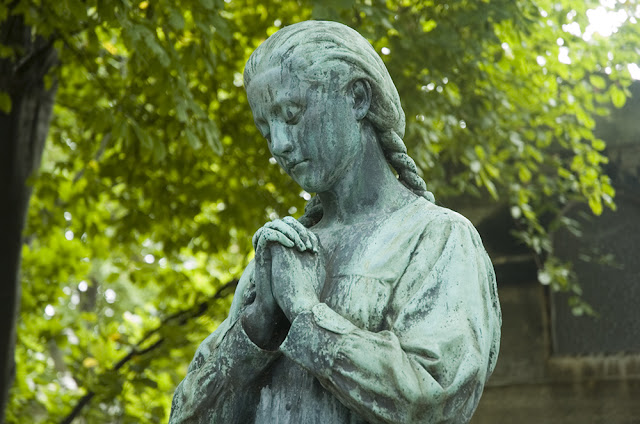 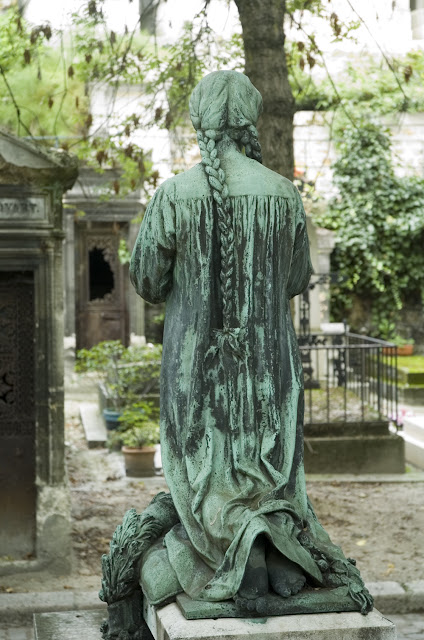 Division 42, French sculptor Henry Triqueti (1803-1874), was noted primarily for religious themes. This haut-relief bronze sculpture was to honor his only son Edouard, who was killed in a horse riding accident in 1861. It represents Jesus raising Lazarus from the dead: 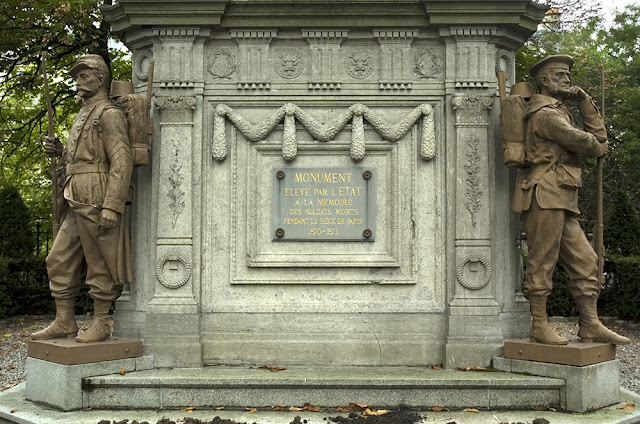 This monument consists of four statues: 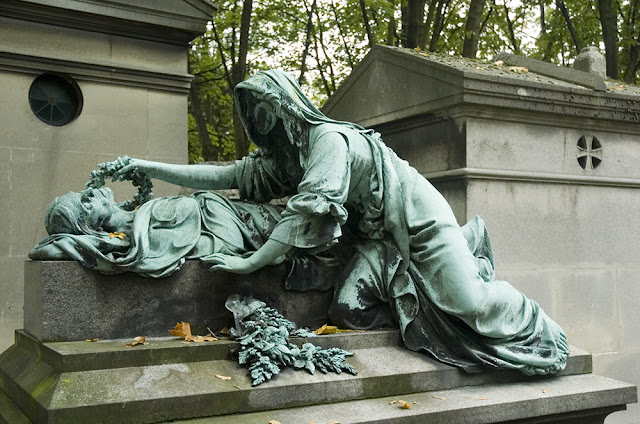 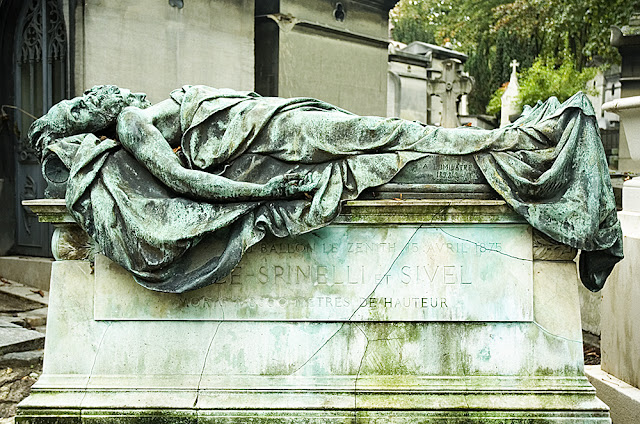 Both men died of asphyxiation when their balloon ascended too high. A third man, Gaston Tissandier (1843-1899) survived. Tissandier is buried in division 27. 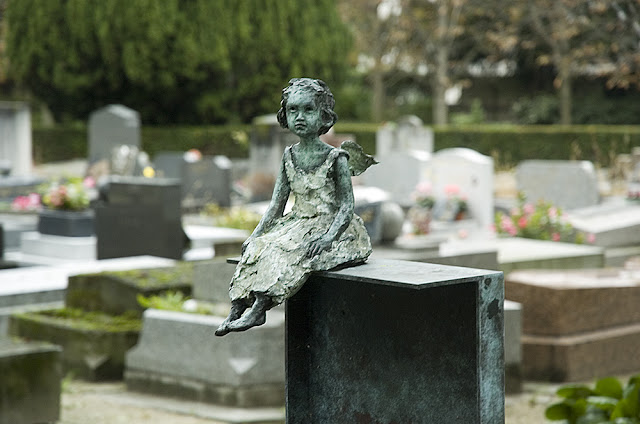 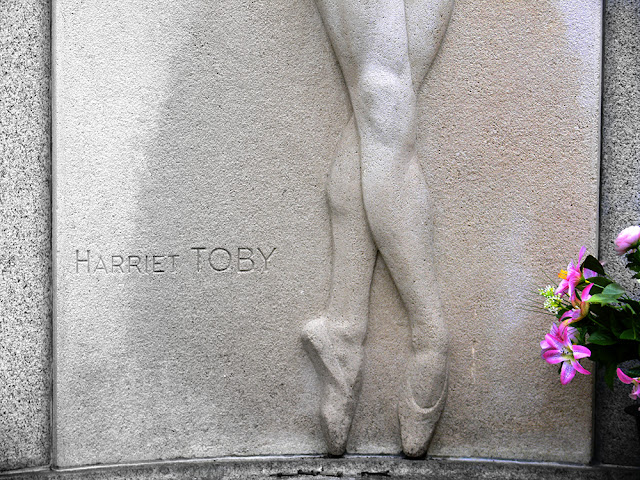 Born Harriet Joan Katzman, she died in a plane crash with French actresses Michele Verly and Alice Topart. Every time I look at this relief I wonder, "How much of her short life did she spend up on her toes?" 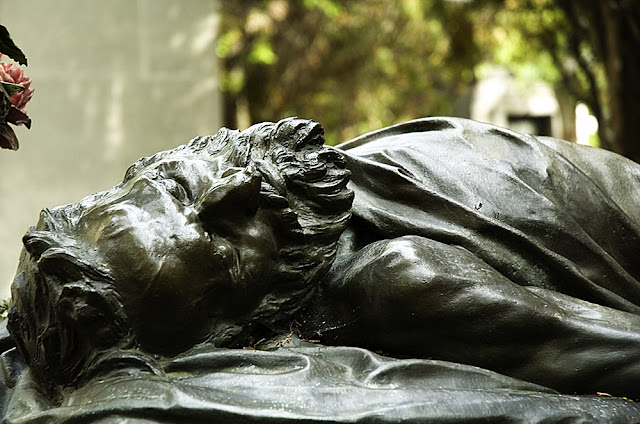 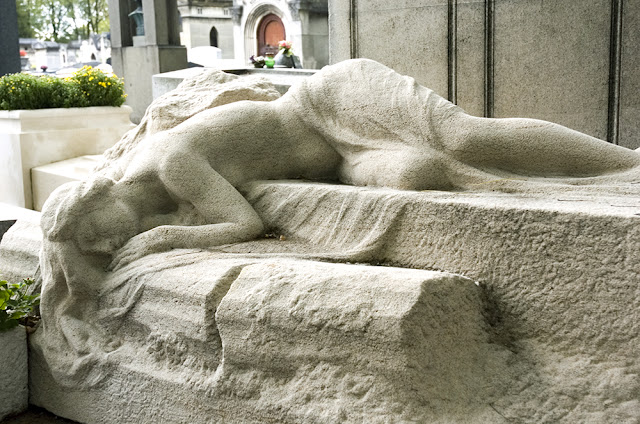 This isn't just a figure resting on a tomb lamenting the passing of someone buried beneath the stone; it's someone who is in pain so profound that all she can do is drape herself over the cold marble like a human shroud, forever placing that last kiss on the broken column representing a life cut short. 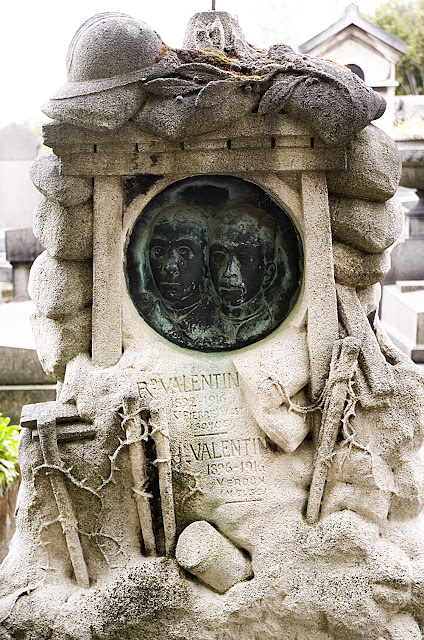 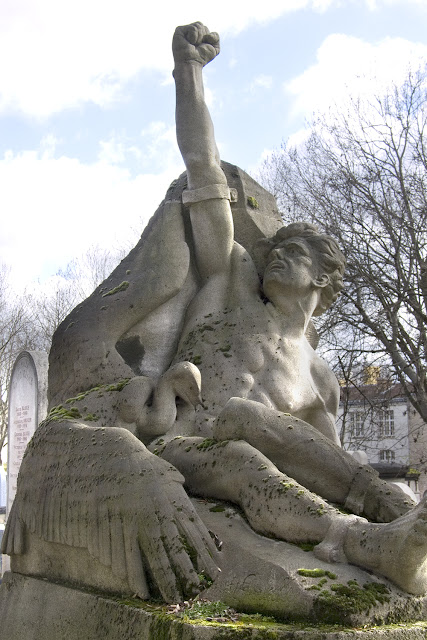 Little is known of Boucherot and his connection was to the Prometheus story remains a mystery.

Division 97, Memorial to the French Deportees for Compulsory Work Service in Nazi Germany during the Second World War; sculpture by I and J. Gallo: 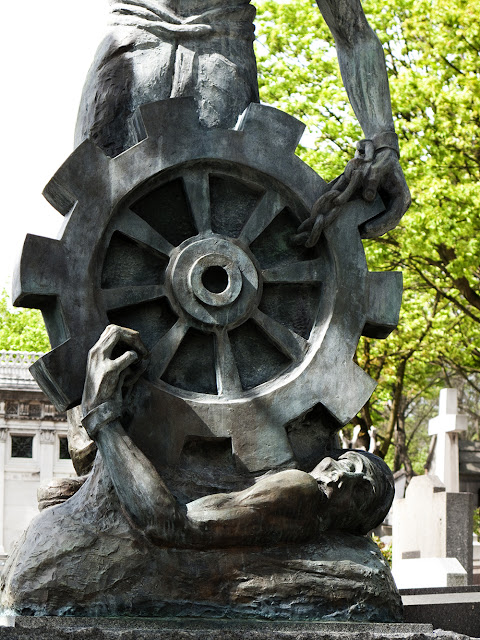 Division 97, Memorial to the Jewish Deportees to the Oranienburg-Sachsenhausen concentration camp; sculpture by J. B. Leducq: 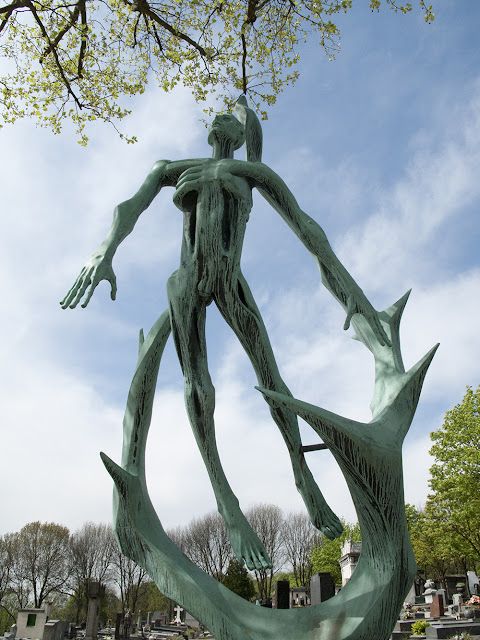 Who were they, these two, sharing a tender moment of affection forever carved in stone?
Posted by Steve Soper at 8:19 AM No comments:

Memorial to the Deportees to Oranienburg-Sachsenhausen division 97 Pere-Lachaise 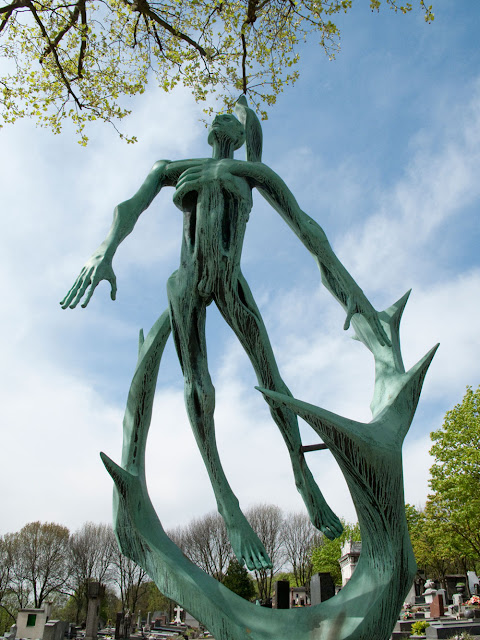