Sculpture by I. and J. Gallo. 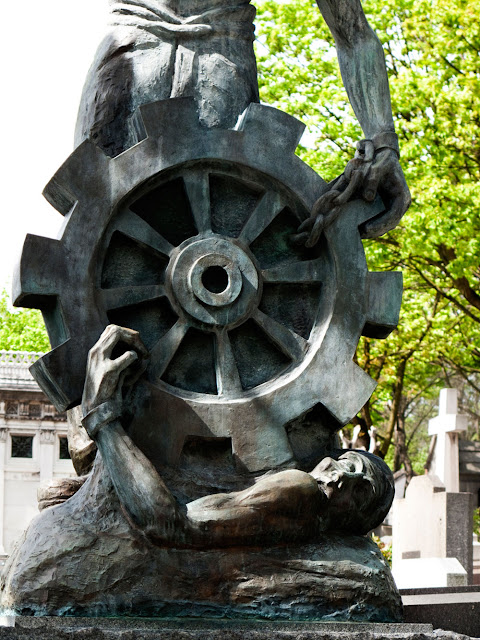 Memorial to the Deportees to Buchenwald-Dora division 97 Pere-Lachaise 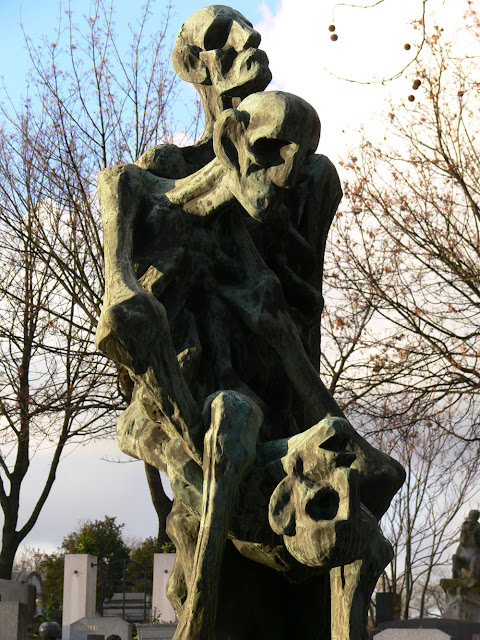 And just what is the story here I wonder? (If you know, please tell me.) 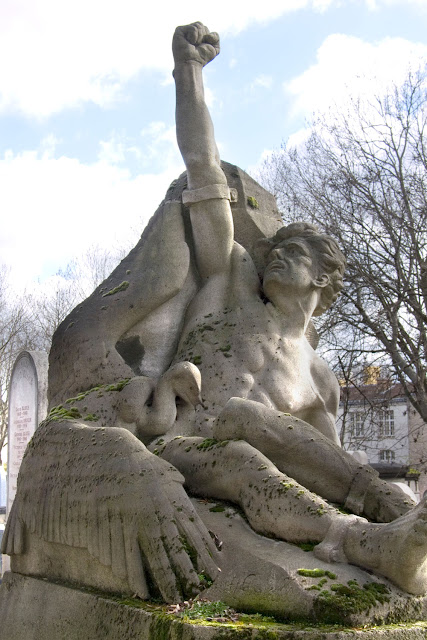 Whether it's something as simple as the font or the stylistic elements of this unassuming tomb, or the more complex features of the cherub overseeing the passing of this young woman, I can't say. But I find this bit of stone positively striking and cannot take my eyes off her left hand. . . 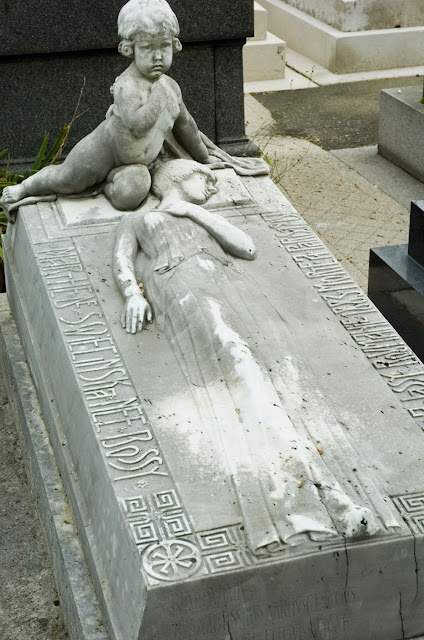 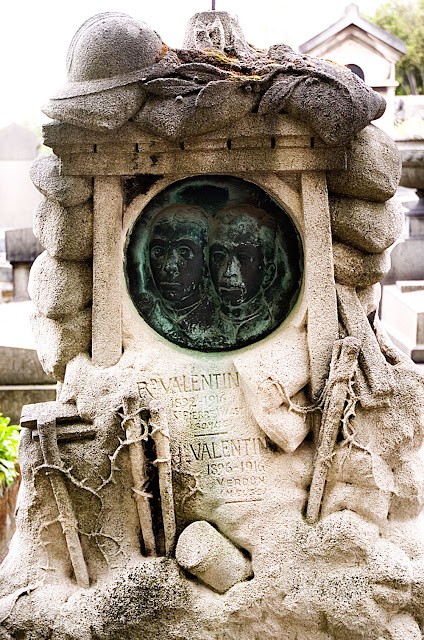 Not terribly original perhaps, but a nicely executed variation on an age old theme, the door slightly ajar, opening for a new life or closing on the old one? 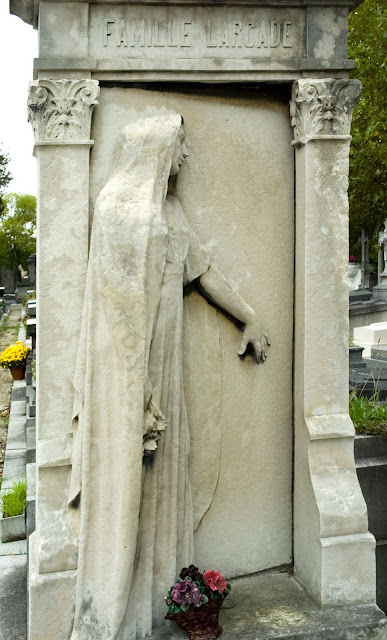 A fitting tribute to the inventor of the dynamo. Bronze sculpture by Mathurin Moreau (1844-1912). 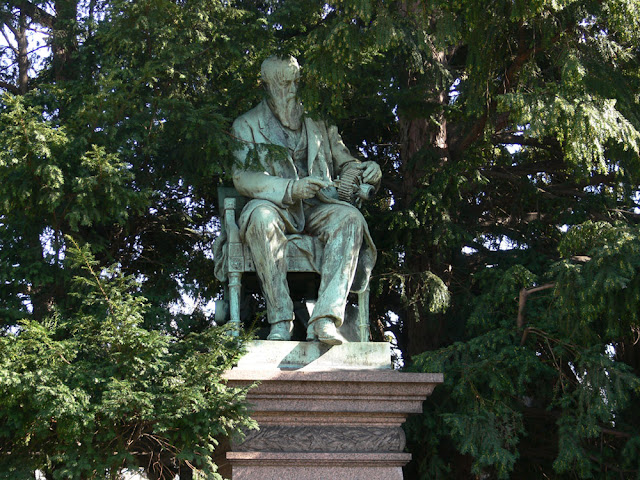 Actress. I continue to wonder what is she thinking, and who, or what, is she looking at? 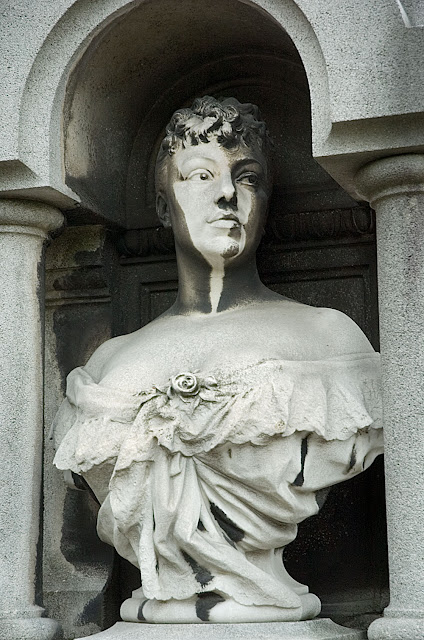 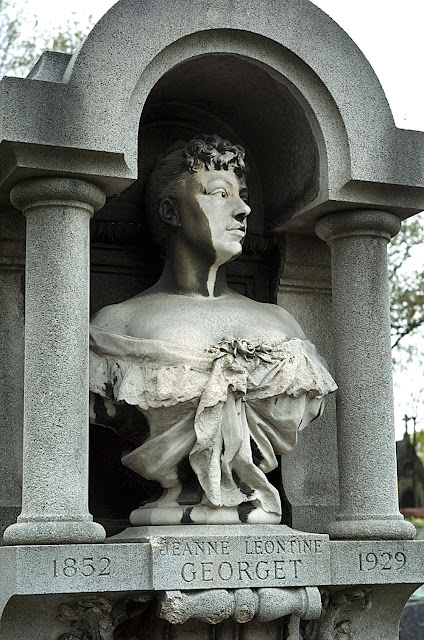 Antranik (or Andranik) was a leader of the Armenian liberation movement. During the Balkan Wars in 1912-1913, he fought for Bulgaria against Turkey. Then he returned to Armenia to organize the Armenian volunteer units to battle the Turkish regular army. After the fall of the Republic of Armenia, he immigrated to America, and died in Fresno, California, in 1927. His remains were taken to Paris in 1928, and finally brought to Armenia in 1999. Sculpture by Leon Mourdoff. 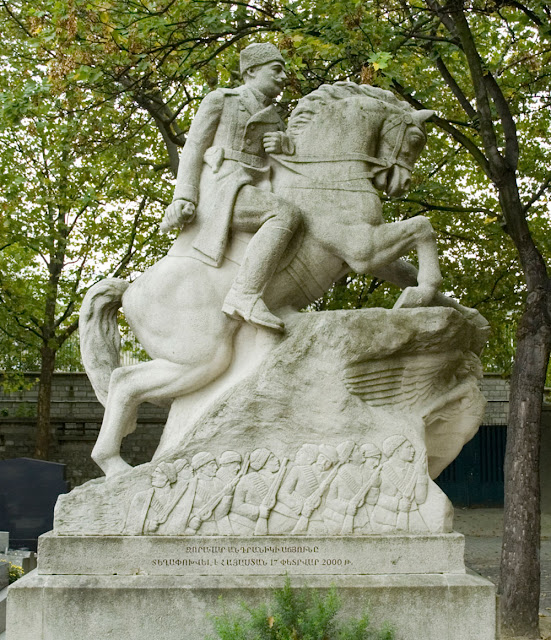 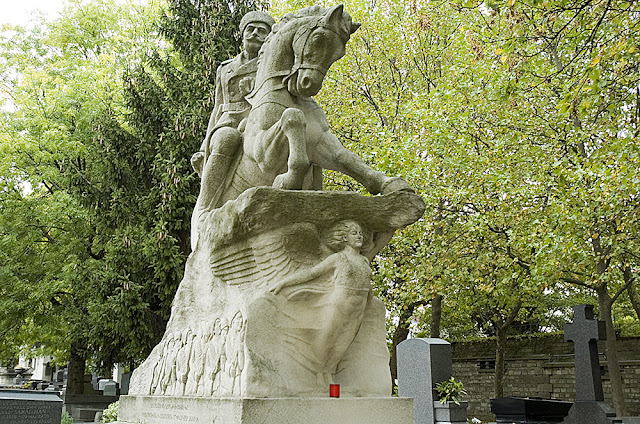 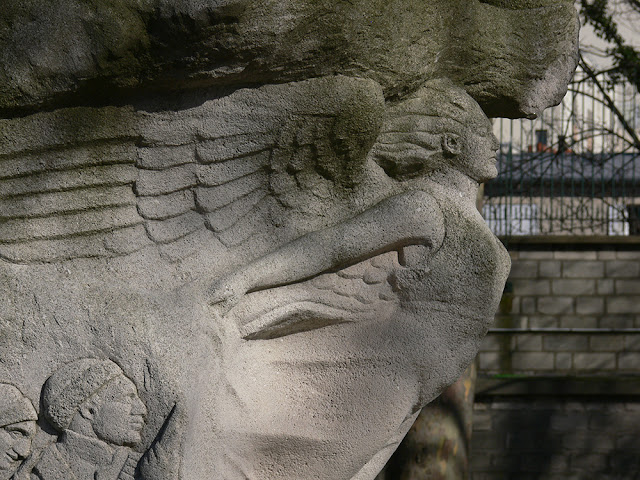 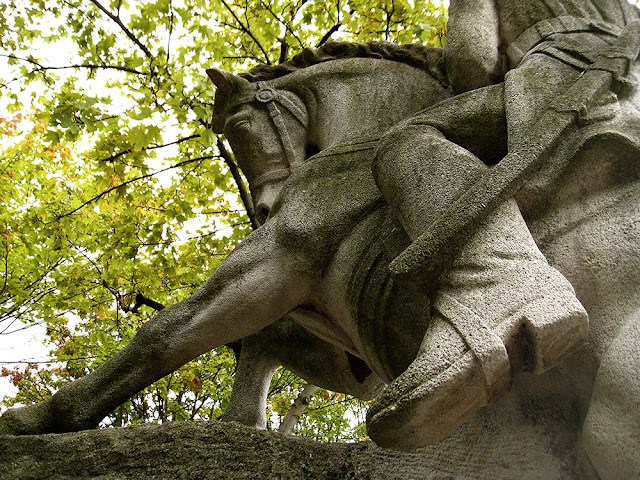 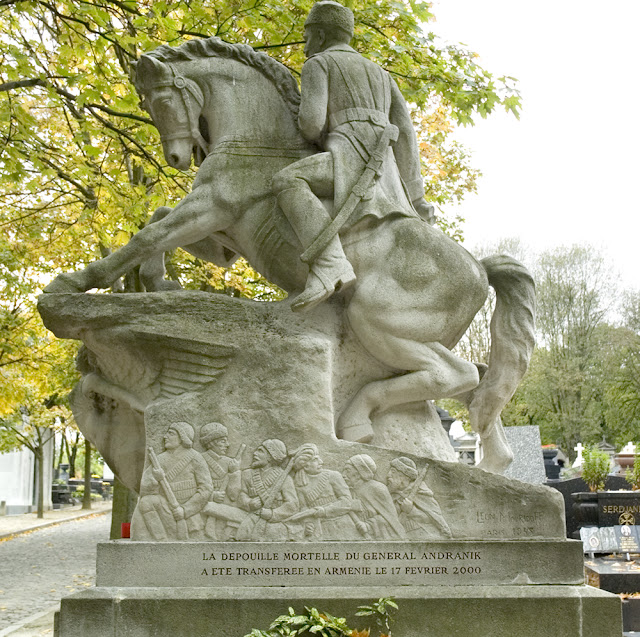 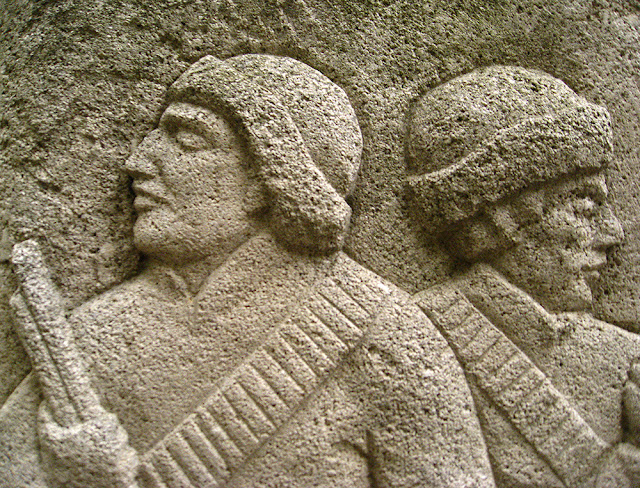 I have always found this a curious work. Heres a young girl, probably Marguerite herself, does not appear to be sad or grieving or otherwise in anguish but mildly curious about the person standing in front of her grave. Curious for all eternity, of course, but still. . . 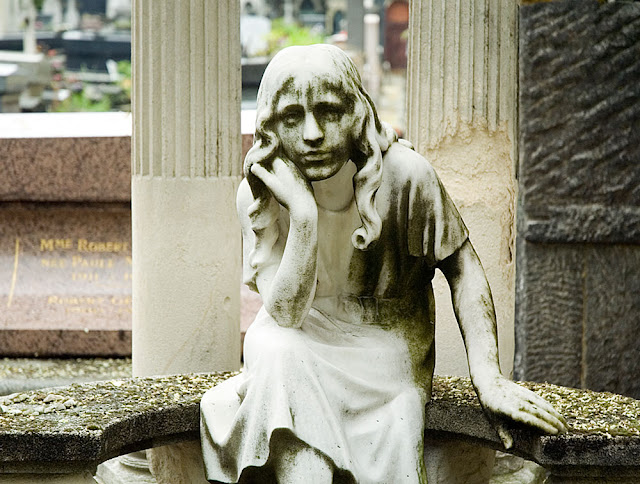 This isn't just a figure resting on a tomb lamenting the passing of the one buried beneath; it is someone who is in such great pain as to drive her to drape herself over the cold marble like a human shroud, forever placing that last kiss on the broken column representing a life cut short. 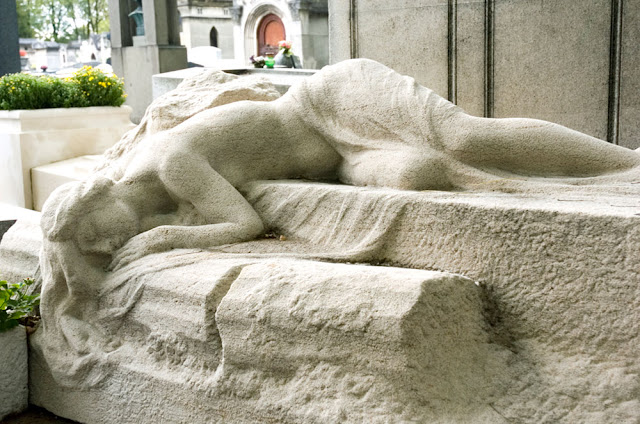 For me this sculpture is strikingly simple, and it's not really it's artistic aesthetics that appeal to me so much as how it seems to encapsulate perfectly what actually transpires in this cemetery. . . 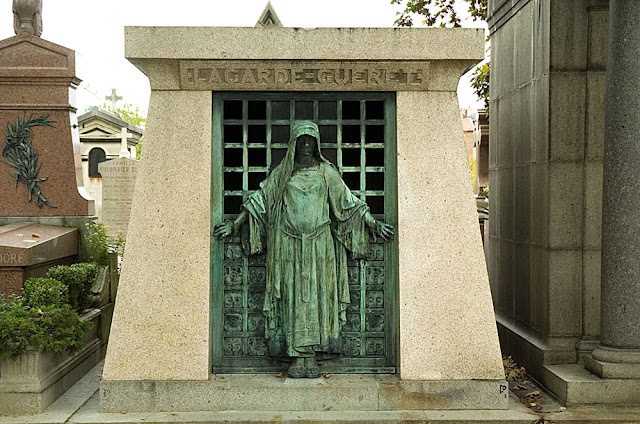 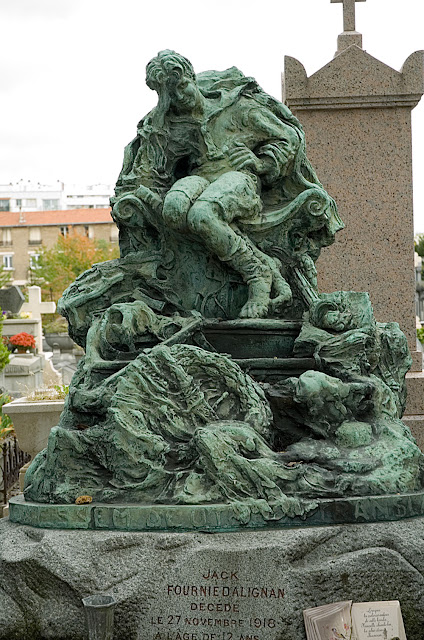