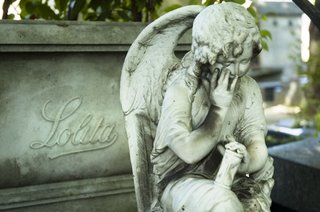 A little less than 5 acres in size, Passy cemetery (opened in 1820), like St. Vincent in the 18th arr., is small, intimate and yet with much of the same characteristics found in the larger cemeteries in Paris: the look and feel of a necropolis, long avenues marked by benches, shading trees, and fantastic sculpture full of pathos, humor and life even in death. But unlike the Big Three cemeteries, Passy feels like a small village rather than a city, making you feel as if you were in a city whose inhabitants have all just stepped out to lunch. (photo: "Lolita" in division 2.)

Located just behind the Palais de Chaillot in the Trocadero area the cemetery is easily reached by Metro (Trocadero stop). (In fact the architect of the rather unattractive decaying hulk of the Palais, Jacque Carlu is buried in Passy.) 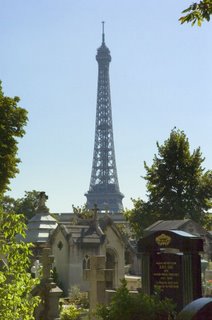 Culbertson/Randall is unfortunately of little help here. Apparently when the authors visited Passy preparing the 1986 edition of their guide they found that the cemetery was "not officially divided into sections” and as a result produced their own division numbering layout “to facilitate touring.” Today, however the cemetery is divided up into divisions which are clearly located on the official cemetery map – along with the ubiquitous large map near the entrance as well. And believe me a map here is essential as there are neither division markers nor any street signs in the cemetery proper. I also used Bertrand Beyern’s “Guide des tombes d’hommes celebres” which is a big help – he provides both a clear listing division-by-division of the well known buried here as well as a nice map of his own. (photo: I read somewhere that the tower was originally painted bright yellow.)

After Pere Lachaise Passy is most certainly my favorite cemetery and given its location and manageable size – not much larger than some outdoor galleries – I urge you to try and spend an hour or so wandering around here. You won’t regret it. 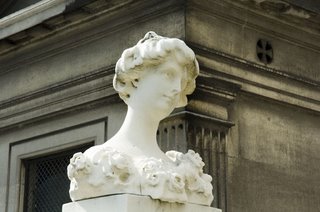 For a space this small, in the very shadow of the Eiffel tower, some truly remarkable people are buried here:

Also buried here are folks whose names are largely unknown but whose memorials are a testament to their wit and imagination: Harry Sharon, Albert Laurans, the Sander family, the de Sa Valle family, the Madrenas y Satorres family, Adelaide Boisseree and the enigmatic bit of stone over the family of Jose de Saz Cabellero: 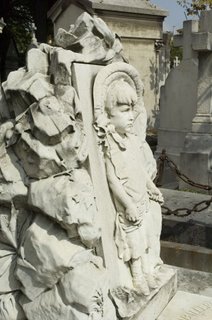 To see these and other photos, just click here!

One curious note here. Culbertson/Randall, as well as Beyern and Fred Sofi in his website list a large, striking piece of sculpture over the tomb of Antoine Cierplikowsi; Sofi even notes that the piece was done by X. Dunikowski (although Xavera Dunikowski the Polish sculptor died in 1964, some 12 years before Cierplikowski). The photo of this sculpture in Culbertson/Randall is powerful indeed – unfortunately it doesn’t seem to be there any longer. In fact, the cemetery does not list it on its map nor have I been able to glean any information from them about what happened. Maybe you know?
Posted by Steve Soper at 12:30 PM 3 comments: 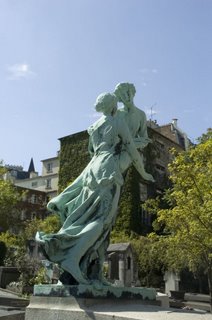 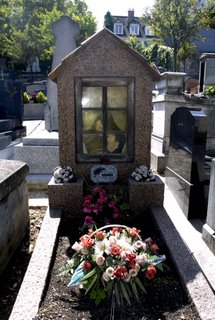 You can see more photos online; just click here!
Posted by Steve Soper at 11:52 AM No comments: 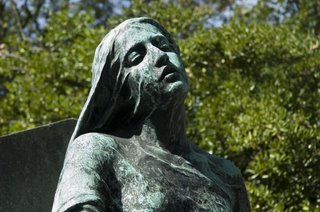 At about half the size of Montparnasse, the 28 acres of Montmartre cemetery, tucked into the folds of an old quarry, present an easy afternoon stroll. And with the busy Rue Caulaincourt passing directly over the entrance off of Rue Rachel the cemetery seems to be a bit less melancholy than either Montparnasse or Pere Lachaise. Still as you wander around you will inevitably stumble upon the tiny fragments of people's lives, fragments though which are designed to leave a permanent claling card of who they were and why you should remember them. (photo: Robert Didsbury tomb in division 21.) 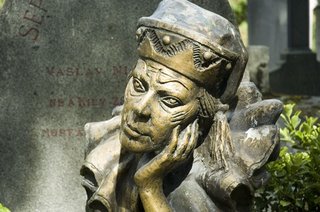 To get to Montmartre get off at the Place Blanche metro (line 2) and walk a block or so westward and on your right you will see Rue Rachel. The entrance is at the end of this very short block. Stop at the guard shack at the entrance and ask for "un plan sil vous plait." The map isn't terribly detailed but it does provide at least division numbers and a general idea as to where a person is buried in the division. Oh, and there is a WC just around the corner on your left as you enter; but these facilities are neither clean nor well-stocked with the barest of necessities so be prepared! (photo: the dancer Nijinsky in division 22.) 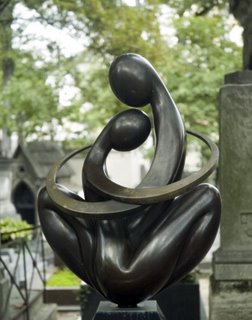 In finding your way around the cemetery not only provides a handy map but has also placed large maps throughout the cemetery so you can use them to refer to if necessary. You can also use the Culbertson/Randall tour map if you have their book -- they tend to highlight smaller dividing pathways so it's a bit easier to fix your location at nay given time. Of course most of the major monuments and more famous individuals will be found fairly close to the larger roadways. (photo: Ludmila Tcherina in division 29.)

Upon entering the cemetery you can either turn left toward divisions 15 and 33, go straight ahead todivisions 17 (right) and 31 (left) or you can do what I did and turned hard right and walk up the steps to division 1 (with 17 and then 18 on your left). This is a short walk -- in fact it is an impasse -- but well worth the effort and backtracking. You get a pretty grand view of at least the near parts of the cemetery and then there are seveal of the most fantastic sculptures in the cemetery. Tehy don't recall famous people -- well not broadly so -- but you need to at least stop by the Laurecisque family (division 1) and see the three members of the family (19th century) in their coffins, upright with, now get this, thgeir toes poking out from undrneath! Plus their histories are neatly incribed and even if your Frnech is weak you'll pretty much get the picture.

Also in division 1 in Guy Pitchal who certainly had a keen eye for perspective. You can see him smoking a pipe but his bust is in effect inverted and no matter where you stand he seems to be looking at you. Fantastic. And across the path in division 18 is "Dalida", the singer Yolande Gigliotti who will forever be beautiful.

You can see photos of these and many more online by just clicking here.

The cemetery is open 7 days a week. From November to March hours are Mon-Fri 8-5:30, Sat 8:30-5:30 and Sun and holidays 9-5:30; from March to November the opening hours are the same but cemetery closes at 6 pm every evening. (photo below: Alphonse Baudin in division 27.) 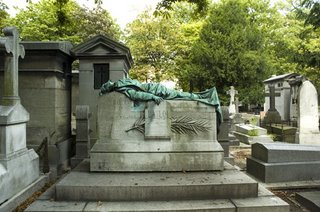 Posted by Steve Soper at 1:49 AM No comments: