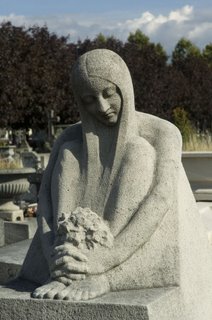 The good news is that the leaves are falling off the trees in the cemeteries here, making photography and research that much easier. Having said that I will miss the full foliage found on many of the old stones here. They are truly a wonderful thing to behold, the old, the ruined, the stone that man forgot but which is now taken over by nature. Amazing.

Another bit of good news is that I’ve finally got a website online, www.pariscemeteries.com.

Stop by take and look and let me know what you think!

Right now the site consists primarily of photos but I will be making some major changes to its structure later this fall. Any suggestions would be greatly appreciated! (photo: Montrouge cemetery.)

The bad news (sort of) if that I have had to return to Pere Lachaise to redo all my previous work.

Everything I did last August, hundreds of images, were deleted from my hard drive and very few of them were recoverable (using Prosoft’s Data Rescue II). So starting yesterday (Tuesday) I’ve been returning to Pere Lachaise to reshoot everything. But there is a silver lining in all this.

First, I’m far more systematic now. I’m going division-by-division, starting with no. 1 and sticking firmly to that. Second, since I have already spent quite a few days at Pere Lachaise I am already very familiar with the place of course, and by not having a firm agenda – I mean I do know the images I want to replace naturally – I am spending more time in each division and have already found three graves I had looked for on several occasions before. And finally, I wanted to return later in the fall in any even so here I am!

As for the statues of my work in the cemeteries of Paris, to date I’ve visited every cemetery on the left bank (within the 20 arrondisement plan of the city) at least once: 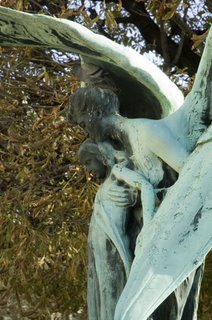 Montparnasse (14th), Vaugirard (15th, Grenelle (15th), Montrouge (14th), and Gentilly (13th). I’ve been to Montparnasse at least seven or eight times so far. Vaugirard and Grenelle are definitely worth a stop if you’re in that neighborhood (they are quite close to one another) but I recommend you go in the morning for the light. Montrouge and Gentilly are at the periphery of historic Paris; Montrouge is the easier of the two to get to by Metro and has some fairly remarkable statuary. (photo right: Grenelle cemetery.)

On the right bank, I have visited so far:

So far I have been to Pere Lachaise more than two dozen times, Passy several times and Montmartre probably 10 times or so. I strongly recommend a serious stop at any one or all of these. Passy is small but full of outstanding, quirky and fascinating statuary and sculpture, while the tiny St. Vincent’s is an easy 10-minute walk from Montmartre so they can both be done together. St. Vincent’s is another one you might want to hit in the morning for the light. Naturally Pere Lachaise remains the number one cemetery destination in Paris both for the wondrous sculpture, diverse physical layouts which produce almost mythical settings of ruins juxtaposed with foliage amidst natural settings just begging to be photographed, and of course the famous people just waiting to meet you.

There are about five or six others on the right bank I need to visit. I'll keep you posted.

Steve
Posted by Steve Soper at 1:22 PM No comments: