This is a very lightly retouched/manipulated photo of the Laurent family grave in Belleville cemetery, Paris. The central object is so compelling that I couldn't bring myself to modify anything other than the tonal values.

The cemetery is located near the spot where Claude Chappe set up his first practical semaphore telegraph signaling system in 1792. Chappe himself is buried in division 29 of Pere Lachaise. 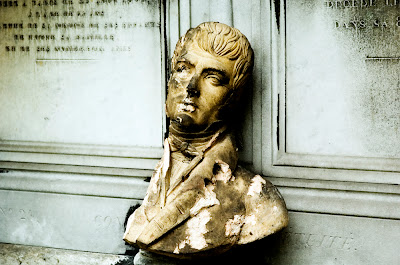 Posted by Steve Soper at 6:57 AM No comments:

I took this photo at Calvaire cemetery, near Sacre Coeur in Montmartre, Paris, on November 1, 2006. The cemetery is only open this one day out of the year, All-Saints' Day, and there was a line of people wending their way through the tiny burial ground trying to connect with the distant past, trying to fathom these Parisians long-dead for several centuries. In fact Calvaire is one of the two remaining church burial grounds left inside historic Paris, that is, inside the 20 arrondissements. (The other is Charonne in the 20th arr.) Shortly before the revolution in 1789 the king ordered all the church burial grounds closed (for health reasons) and the remains removed to what is now the famous catacombs in Montparnasse, in the southern section of the city.

For some reason, only Calvaire and Charonne were left undisturbed, more or less.

Anyway, following the closure of the old church burial grounds the city began creating cemeteries to the east (Pere Lachaise), south (Montparnasse) and north (Montmartre) to provide a more tidy and elegant repository for the remains of Paris' "departed."

Posted by Steve Soper at 9:22 AM No comments:

Over the years Philippe Landru and Marie have written and shared a series of informative articles on many of Paris's cemeteries and some of the more unique people interred in the city's burial grounds. Their work is exhaustively researched and meticulously details. Most of these Philippe put online at his website.

Marie has just informed me that Philippe has completely overhauled his website, which now covers not just the cemeteries of Paris and France but also some of the more notable burial spots in Europe, the UK and in the USA. Moreover, you can still access the numerous articles formerly available on his old site but the new site has a much more user-friendly navigation system and is spiffier look to boot.

It is in French only.

Just click here to check it out -- or cut and paste the following link:

http://www.landrucimetieres.fr/spip/
Posted by Steve Soper at 7:53 AM No comments: