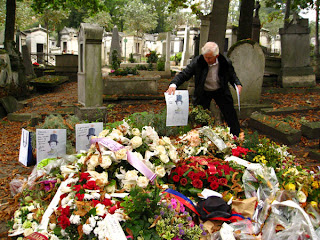 I met David on the path seperating divisions 9 and 10; he was trying to inquire from some workmen repairing a headstone, where he might find Marcel Marceau's grave. They seemed eager to help but were at a loss of trying to (a) understand what he wanted and (b) help him find his way. I was walking by and overheard his pleas for assistance so I quietly butted in and asked if I could help.

He replied in a very British accent that he wanted to find Marceau's grave as he has a few things he wanted to place on it -- he had heard that there weren't many in attendance at the funeral and was concerned that the great man's memory was already being lost. So here he was to make a small contribution to set things right.

I handed him a cemetery guidemap -- I always keep a half dozen or so handy for just such occasions and end up giving most of the out every time I go to the cemetery.

He said "no thanks," he had no idea where he was and would I be so kind as to show him the grave. He was most insistent on his lack of map-reading skills and appeared really so eager to find the grave that I said I'd be happy to show him the way. It was only a few-minute walk over to division 21 and so off we went.

Moments later and we were standing over the mound of flowers that had been left in wake of the funeral last week. (Get it, "wake"?) David then pulled out a sheaf of plastic-covered small posters, each imprinted with an image of Marcel and a little bit about his life. He then placed them around the flowers and I took his photo. He seemed so pleased to be able to do this for someone he felt had made an impact on his life. 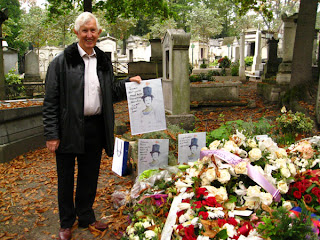 I then pointed him toward the way back to the main gate. He thanked me and off he went smiling.

Wish you had been there,

Steve
Posted by Steve Soper at 6:38 AM