Blaise Pascal, Jean Racine and the patron Saint of Paris 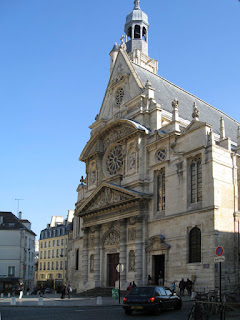 OK so these two are interred in St. Etienne du Mont, and not in an outdoor burial ground, the main focus of this blog and my Paris cemeteries website. But hey, they are, after all, two of the great luminaries of French cultural history. Anyway, located just across from the backside of the Pantheon this church is probably often overlooked by many tourists. They walk throuugh the hallowed halls of the Pantheon to pay their respects to the great figures of French history and probably never think to slide around the corner and stop in at the seemingly unremarkable church sitting in the back corner.

But that would be a mistake. Once inside you'll discover this is an amazing piece of artwork in wood, stone and glass. 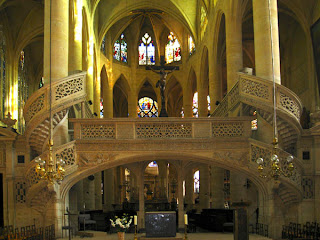 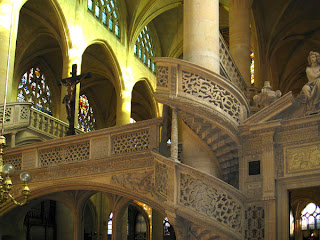 In fact this very space was quite probably the location of one of the very first Christian churches built in Paris. Originally built in honor of Saints Peter and Paul, by Clovis, king of the Franks, he had the church rededicated to Sainte Genevieve (422-512) who was the patron saint of Paris (she reportedly turned Attila away from the gates of Paris). The first chapel was built around her crypt in the sixth century and subsequently extended and enlarged over the centuries. (That's her sarcophagus below.) 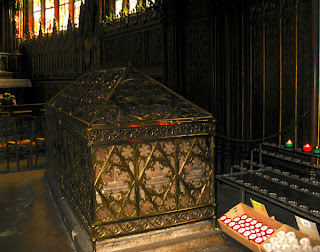 Blaise Pascal (1623-1662) was a mathematician (he wrote a treatise on projective geometry at the age of sixteen), physicist and religious philosopher. He also became one of the great French prose writers and his wit and insight reflected in works such as the Pensees, is still a touchstone in Western literature. (His death mask is below.) 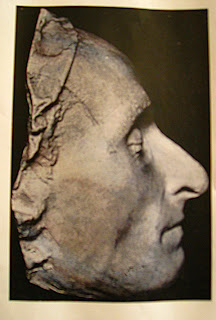 Jean Racine (1639-1699) is one of the great French dramatists and poets, certainly one of the great tragedians of the 17th century, and is read widely today for his elegant and simple style of writing.

A wonderful little detour. and aftewards you can take the five-minute stroll over to the Place Contrescarpe for a coffee or aperitif. How about that?
Posted by Steve Soper at 4:55 AM