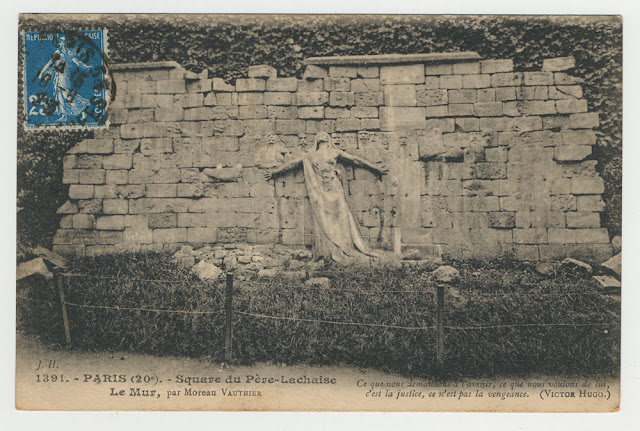 This dramatic and moving sculpture by Paul Moreau-Vauthier (buried in division 14), depicts the final moments of those 147 communards lined up against the mur des federes in division 76 and summarily executed, and whose bodies were dumped into a mass grave directly in front of the wall. One legend has it that the pieces of stone used here came from the original wall, although there does not appear to be any evidence to support such a  claim -- still, it makes for a great story.

This is located outside of the cemetery and is part of Square Samuel de Champlain (formerly called Square Pere-Lachaise) and runs along the northern wall of Pere-Lachaise parallel with Avenue Gambetta.

When you exit the Pere-Lachaise metro cross the street like you're heading to the cemetery but bear to the left onto the Avenue Gambetta.
Posted by Steve Soper at 5:33 PM