There is very little to recommend a stop at Grenelle in the 15th arrondissement, except for the Henri Schmid sculpture. This is, I think, one of the sweetest pieces of artwork to be found out-of-doors in Paris; it takes on even great power and poignancy in such a small cemetery. (174 rue St. Charles. Metro: Lourmel.) 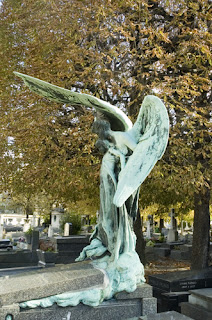 Also off the beaten path is Vaugirard where you can find the very moving "Soldiers'" lot, a field of simple crosses against the backdrop of hi-rise apartment buildings. While most tourists go to Les Invalides to see Napoleon's tomb or those of the great and near-great martial heroes of France, it is at Vaugirard that you will find the burials of quite a few of the soldiers who died at Les Invalides hospital, many from wounds during the First World War. Also worth a stop is the compelling sculpture highlighting the grave of Antony Cottes, a remarkable bit of art which reminiscent of the Pieta, but with a martial twist. (320 rue Lecourbe. Metro: Lourmel or Convention.) 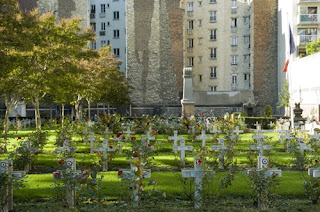 I also wanted to go back to Passy, to see the view of the Eiffel tower once more, to pay my respects to Pearl White again, and look for the now missing Cierplikowski sculpture, a piece of very dramatic art that was well-documented in past years but has apparently been removed, along with the grave as well. (2 rue Commandant-Schloessing. Metro: Trocadero.)

Good news in the continuing Pere Lachaise "missing bust" saga: both Valentin and Lucipia are in the hands of the conservation, apparently for safekeeping. Of course, I have no idea what "safekeeping" means, but presumably taken away from public display; for how long is anyone's guess.
Posted by Steve Soper at 7:54 PM