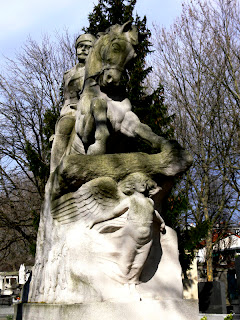 It's said that more than a million and a half people visit Pere Lachaise each year. If that's true they must have all been in the cemetery yesterday because it was packed with tourists of every shape, size, color, sexual orientation, religious affiliation, and nationality.

What a beautiful day it was in Paris, very much like spring with temps reaching the low 60s. The day began slightly cool but by midday had warmed up and when the sun came out it was actually quite warm, almost uncomfortably so in a lightweight jacket.

And so what better day to be out strolling in one of the world's most fantastic sculpture gardens.

One of my favorites (out of a couple a hundred I suppose) can be found in division 94, just a couple of meters from the final resting place of Gertrude Stein and Alice Toklas. You really can't miss General Andranik Ozanian, one of the heroes of Armenian liberation, rearing hup on hir horse ready to charge into battle. (He also has another statue in a square named after him in Meudon, a suburb southwest of Paris.) General Andranik fought against the Ottoman Turks in Armenia and Bulgaria and also attempted to prevent the Turks from invading eastern Aremnia in 1918-1919. As know of course he was not successful and in 1919 he disbanded his army and along with a band of loyal soldiers left Armenia to go into exile rather than live under Turkish rule. He eventually settled in Fresno, California where he died in 1927. His body was brought to Paris and interred in Pere Lachaise, but was returned to Armenia in 2000, so today the statue is simply a memorial to one of Armenia's freedom fighters. (photo above and below: General Andranik's statue in division 94.) 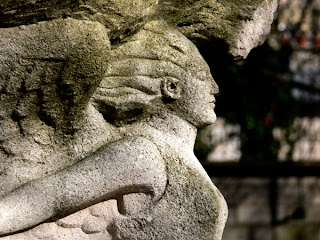 I'm nearly finished videotaping in Pere Lachaise and have now started to turn my attention more and more to taping the people who come here.

But of course I'm not the first to tape the spectators (as opposed to the spectacle). In fact, just last year a documentary was released in Europe and the US interviewing some of the people who come to visit Pere Lachaise. The film is called Forever, put together by Heddy Honigman, is in French and English, and was released by Cobos Films, a Dutch production company. It received very good reviews and sounds fascinating -- now it's just a matter of finding a copy.

Steve
Posted by Steve Soper at 7:18 AM