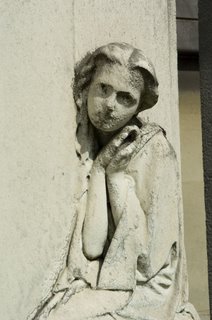 If you've followed this blog at all you know that since early August I've been wandering through the cemeteries in Paris, documenting the statuary and the history of France as told through it's most prestigious burial grounds. During that time I've also spent quite a bit of time online looking for information relevant to the cemeteries in Paris, and have listed below those which seemed to offer the best information, photos and maps. Most sites, particularly the ones in English cover the Top Five cemeteries, which includes the Big Three of Pere Lachaise, Montmartre and Montparnasse and then St. Vincent's and Passy. Note that some also have a links page ("liens") as well.

With the exception of the Wikipedia sites virtually all are in French with very limited English provided. (photo: division 8 in Passy cemetery.)

Oh, and if you have any suggestions I’d be happy to include them here.

Wikipedia is a great place to start, covering some dozen or so cemeteries within historic Paris. It also has a link here to the burials at Pere Lachaise. In English.

Lescemetieres.com has lots of photos and, most importantly, good online maps as well as histories of Pere Lachaise, Montmartre and Montparnasse among others. In French with some English.

The Dutch website Meijsen.net is another good place to look online with handy interactive maps. In Dutch.

"The Friends of Pere Lachaise" is one of the best sites I've found so far with tons of helpful information about the cemetery, and in addition to photos and gravesite listings you can find old photos, postcards and very nice artwork. There are also several pages with information about various nationalities represented in the cemetery. In French.

Another website that also has plenty of information online as well as interesting topics such as artwork, postcards and books is lachaise.gargl.net. In French.

For English-speaking audiences Wikipedia is probably the best all-around source for information.

Pere-lachaise.com has a truly cool and very good online interactive map. In English and French.

Interestingly, there are two websites devoted to looking at how the female form is presented in funerary statuary in Pere Lachaise: Eternelle and Femmes du Pere Lachaise. The former has an odd way of presenting thumbnails, flattened almost to the point of being unrecognizable. The latter site is clean and straightforward. Both in French.

Parisrama.com is another site in French and (poor) English but with nice old photos, which unfortunately are largely obscured by the clunky watermarking.

Passy cemetery is my personal favorite, in the shadow of the Eiffel tower and so small and yet so filled with great works of art.

If you're looking for information on tiny Calvaire cemetery near Sacre Coeur, click here. The site is in French only, the photos are rough and unedited but there is plenty of text about one of Paris' oldest cemeteries.

Headstones.fsnet.co.uk is a website focusing on b & w photo collections from the Big Three (Pere Lachaise, Montmartre and Montparnasse) and Passy and St. Vincent cemeteries. (Many photos are unlabeled and unlocated however.)

And last but by no means least is the superb website operated by the American Battle Monuments Commission, which covers American National Cemeteries on foreign soil.

Check out gravestonestudies.org for a broader view about cemetery studies. 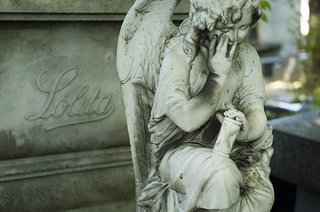