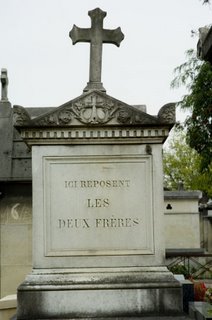 This past Sunday I enjoyed a special treat here in Paris: a chance to explore Pere Lachaise with a couple of the cemetery's historians, Marie and Philippe. A teacher of English in Paris Marie indulges her affection for cemetery studies both in her native France and abroad -- in fact not only is she a founding member of the "Friends of Pere Lachaise" but is also a "Friend" of Kensal Green cemetery in London as well. (photo: Pere Lachaise.)

It wasn't long before Philippe joined us and I soon came to appreciate that when it came to Pere Lachaise these were two very serious people.

In fact Philippe and Marie are both genuine experts on all the Paris cemeteries. Philippe is compiling massive genealogical data from the cemeteries in addition to trying to map the Paris cemeteries using Google Earth, although he told me that the trees in Montmartre and Pere Lachaise are posing a serious challenge to him. I suspect he'll work that out too.

We arranged to meet at 1:30 and Marie was right on time. While we waited for Philippe we chatted a bit, and quickly discovered that we both of the same mind on how important it is to record the histories, the stories which lie buried just beyond the wall on rue Menilmontant.

Pretty soon Philippe arrived carrying a large bundle of maps and cemetery burial books. Marie brought with her maps dating back to 1820 (the cemetery was opened in 1804), as well as 1878 and a couple of 19th century guides to boot. And they were totally and completely dedicated to learning everything possible about Pere Lachaise; indeed they seemed hungry to find something new, something they hadn't seen before.

And here they were willing share their knowledge and expertise with me. I couldn't wait! So off we went!

Sunday afternoon was crisp, brisk and we had a grand time exploring. I had come prepared with a list of questions; in fact I had emailed them to Marie the day before. While we chatted waiting for Philippe she pretty much answered my technical questions and so the three of us spent the next couple of hours roaming through the cemetery, looking for some of my "problem" cases, which they helped me locate. Me: "Where's So-and-so in division whatever?" "Oh, him, right over here." Bam! There it was.

They were also gracious and kind enough to show me some of the special burials. No, not the famous musicians who for some inexplicable reason got buried at Pere Lachaise but the truly special ones: like little Adelaide the first burial in the cemetery (1804), or the "dragoon" whose cenotaph marks the first stone sculpture (1807) placed in the cemetery (his body remained in Poland where he died). 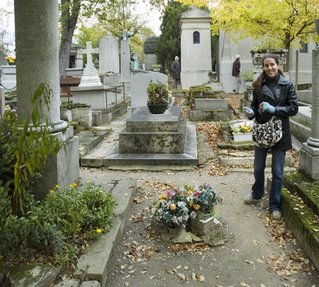 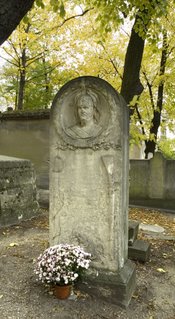 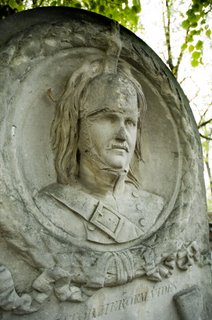 As it started to get dark we stopped for the day. Leaving the cemetery the way we came in, across from the Pere Lachaise Metro stop, we popped into a cafe literally around the corner. Over coffee we talked about the possiblity of future visits to the cemetery. I asked if they would consider doing a series of pocasts on Pere Lachaise and the answer was a resounding YES!