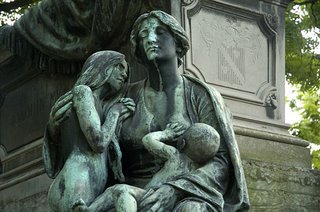 You’ve got your lunch, water, good shoes, camera, and made your bathroom stop. Now it’s time to start exploring.

Every year hundreds of thousands of people pass through the cemetery – temporarily of course – looking for some of the famous and nearly famous, or maybe they want to pay homage to a hero or inspiration. Whatever the reason this cemetery is one of the major tourist stops in Paris to be sure. (photo: Joaquin Maria de Errazu in division 68.)

From my experience I would say there are at least three kinds of visitors to Pere Lachaise. First are the Parisians themselves who enjoy strolling through the cemetery or meeting friends for lunch in front of the chapel with a view of the Eiffel tower.

Second are the “casual tourists” who come to Pere Lachaise because it’s in their guidebook and they want to find the graves of Jim Morrison (of the Doors fame) and Frederick Chopin (of the Chopin fame). Of course much of a site’s popularity often depends upon nationality. For example, the French gravitate to Colette, Marie Trintignant and Gilbert Becaud among others, while the Italians seek out composers Victor Bellini and Giochinno Rossini (even though their remains were long ago returned to Italy). And the number of people from all over the world who visit the grave of “spiritist” Allan Kardec is pretty astounding. (“Allan who?” you ask.)

Third are the “serious tourists”, those people who have their map (or maps) in hand along with pen or pencil and are determined to find as many famous or, if not famous, as many unique grave markers as they possibly can. The serious ones usually work alone whereas the casual tourists roam in pairs or even large groups.

Deciding which kind of visitor will of course determine how you tour the cemetery.

I decided I was going to spend at least a week – and indeed it became rather longer than that in any event – enough time to roam freely, stepping off the main streets whenever the urge moved me or I saw something in the distance that might warrant up close investigation, to explore the divisions in detail. 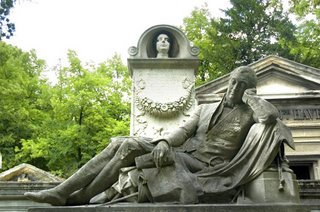 What do you want to see?

I know of no better "by-the-numbers" guidebook than Culbertson/Randall's multi-tour approach to Pere Lachaise for those who want to maximize their limited time or just want to touch the "highpoints". For everone else, I suggest you do what I did: just grab a map and start exploring. At first you'll find yourself in divisions of the cemetery which are orderly and well-structured. If you come in the main entrance you will want to start with division 4 which has some of the most striking sculpture in the cemetery. But don't miss division 2 just to the right of the entrance: wander around for a few moments and you won't be disappointed. From there just follow your map and head to division 7 and the worlds beyond.

If you come in off of Place Gambetta you will be faced at once with a short street lined with poignant monuments dedicated to the various groups who have fought for France in years past: Czechs, Poles, Armenians, Italians, Russians, located just inside the entrance. But then turn left (from the entrance) down Avenue Circulaire and stroll along and you will soon find (with your map of course) Oscar wilde, Gertrude Stein -- and nearby the enormous statue of General Andranik of Armenia.

A bit further along Avenue Circulaire you will come to the powerful reminders that tens of thousands of Jews died in the Nazi death camps during the Second World War, and the memorials found along this bit of cobblestone are a testament to their memory: Dachau, Auschwitz, Ravensbruck and others, all in or opposite of division 97. Incredible. Nearby you will also see the part of the cemetery wall where some 140 communards were shot in May of 1871 after being chased through the cemetery and cornered here. And almost opposite from the wall is the grave of Laura marx Lafargue, the daughter of, that's rioght, Karl Marx. She and her husband committed suicide. Who knows why.

But eventually you will want yo work your way around to those divisions that beg you to get off the paths, walk around behind the overgrowth, wandering around aimlessly: particularly the areas between Avenue Transversale 1 and Avenue de la Chappelle (divisions 47-55 and 67-71) and then divisions 17-31, 8-13 and 39-40. You'll figure it out.

To help get you started click here to see my favorite spots.
Posted by Steve Soper at 3:05 PM