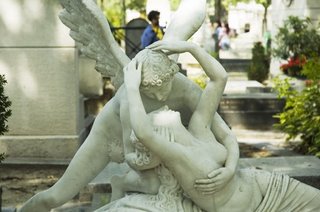 Montparnasse was originally called the “southern cemetery” of Paris, and is divided by rue Emile Richard, which effectively cuts it into two sections.

This division is described by Culbertson/Randall as “old” and “new” sections, with the “old” section being the smaller of the two, whereas Bertrand Beyern's Guide des Tombes d'hommes celebres, refers to the "old" section as the "petit" or small cemetery. For our purposes we'll stick with Culbertson/Randall.) In effect divisions 17, 19, and 25-27 all have both “new” and “old” parts. A quick glance at the map provided by the cemetery office will show you how this works. (photo: grave of Alain Leseiutre in division 1.)

And speaking of maps, the only one available is that provided by the cemetery. If you are looking for someone not on the map and inquire at the office you will need to know a date of death as well as the name.

At half the size of Pere Lachhaise and laid out in a much more orderly fashion, Montparnasse feels and indeed looks like a typical cemetery. Streets are laid out at (mostly) right angles, and divisions appear easily marked. At first glance you might think it will be a breeze finding your way around. Looks can be deceiving, however, and Montparnasse is no exception. 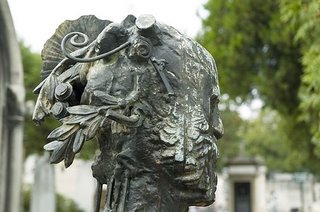 The singular problem at Montparnasse is that the lines separating the divisions are often faint if not impossible to discern. Divisions 10-13 and 9-6 run very close together, with a thin, virtually nonexistent line separating one from the other. You will have to spend some time acquainting yourself with the layout and how one section connects with one another in order to use the maps effectively – and particularly if you are looking for several or more individuals. I continued using the Culbertson/Randall book (1986 edition) and found their maps to be a bit more helpful since they at least tried to lay out the smaller alleyways which sort of subdivided divisions. (photo: grave of Cesar Baldichinni in division 6.) 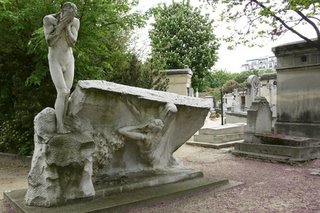 Probably the most controversial gravesite in Montparnasse – if not in all of Paris – is that of former French army office Alfred Dreyfus. Tried for treason on trumped up charges the case became a cause celebre marking the highpoint (or rather low point) in corrupt French politics framed by Emile Zola’s famous ‘J’accuse” directed at the very cornerstone of the rot in the system, Felix Faure gross army incompetence and latent anti-Semitism, all issues which would continue to plague France until well into the 20th century and beyond. Curiously Alfred’s grave cannot be presently located or at least the headstone seems to be missing. (Oh and if you're wondering, Felix Faure is buried in Pere Lachaise, laid out just as he was when he died in his mistress's bed). (photo: de Max's "separation of a couple" in division 4.)

Less well known and not marked in the Culbertson/Randall book but still worth a look are:

I have posted a wide vaariety of photos from Montparnasse online. You can see them by simply clicking here.

If you have any questions, corrections or suggestions about the cemetery by all means send it on. Not even the dead stay put forever.

Next up -- Montmartre cemetery! 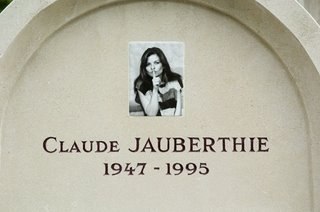