Madeline-Sophie Blanchard, Madame Blanchard, was not the first woman aviator but she was the first woman to pilot her own balloon. When her husband, Jean-Pierre Blanchard, one of the earliest balloonists, died in 1809, she opted to make a career of ballooning and in fact became a regular barnstormer at fairs and special events around northern France.

She was reportedly most famous for her self-designed basket shaped like a bathtub, as seen inhere in an ascent she made from the Champ de Mars on June 24, 1810:

It was during a performance on July 19, 1819, in the Tivoli Gardens, where the Saint-Lazare train station is now located, that her balloon caught fire and she fell out of the basket onto a nearby roof and broke her neck. 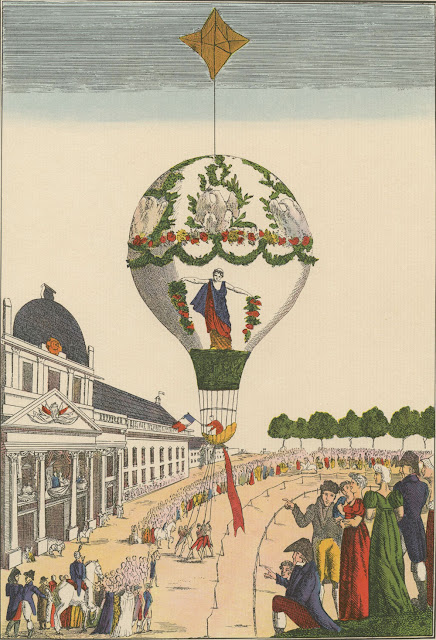 She's buried -- by herself apparently -- in division 13, Pere Lachaise Cemetery. And yes, she's one of my favorites. (Jane Avril in division 19 is another, if you must know.)
Posted by Steve Soper at 8:53 PM