Philippe Landru, the singular expert on who is who and who is where in Paris Cemeteries, recently sent me an email regarding the whereabouts of the incredible bit of statuary that once soared over the grave of Antoine Cierplikowski in Passy Cemetery (division 9).

I first read about this wonderful sculpture in the Culbertson/Randall book, Permanent Parisians, and when I got my chance to actually visit Passy Cemetery for the first time I searched all over but could find no trace of either the sculpture or the grave itself. (The conservation office wasn't terribly helpful on this one, I'm afraid.)

There the matter rested until Philippe explained what had happened. (If your French is up to snuff you can read about this yourself). If not, here's the story.

Antoine was born in Sieradz, Poland and in 1901 moved to Paris where he became one of the most well-known and creative hairdressers in the city. He became so famous that during the first half of the 20th century he opened a large chain of hair salons in Europe and in the United States.

Although he returned to Poland in the last years of his life, according to his best friend, the sculptor Xavier Dunikowski, his wish was to be buried in Passy Cemetery. But when he died in 1976, he was buried in Sieradz and a fantastic sculpture was created by Dunikowski himself was placed over the grave. (photo right) 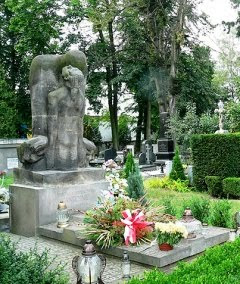 (According to Philippe, the family had apparently refused to allow his remains to be returned to Paris, with the exception of his right hand, which was subsequently interred in Passy. It was over this grave that a replica of the Dunikowski statue was placed.)

So, don't look for Antoine in Passy -- if you want to see the statue you'e going to have to go to Poland.
Posted by Steve Soper at 10:43 AM

How terrible that it was destroyed. thank you very much for your explanation.