This is the "Mur des Fédérés," the memorial to the communards who were killed or executed during the final days of the commune of Paris in 1871. This is located in division 76 of Pere Lachaise cemetery, across from division 97, known for its many monuments and memorials to heroes of the resistance, the tens of thousands of deported French Jews and well-known leaders of the French leftist parties.

In fact, this is the area where the bodies of dozens of communards, many of whom were shot down in cold blood, were buried in mass graves. Many of France's leftist heroes are also buried in the vicinity: Karl Marx's daughter Laura and her husband Paul Lafargue (they committed suicide together in 1911), Maurice Thorez, the French Communist Party leader, Paul Eluard and many others. 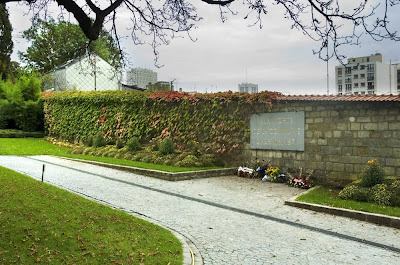