Want to be buried in Paris? 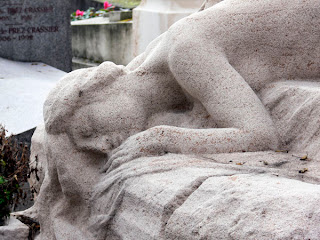 I received an inquiry recently from someone whose mother had expressed a wish to someday be buried in Paris:

My Mother is elderly and we talked about her wishes for funeral arrangements. As we have visited Paris several times over the years and I know she has a fondness for the city I suggested it would be nice if her remains (ashes) could be interned at a cemetery in Paris I don't know if this is possible as she has never been an inhabitant of France.Do you know if this would be possible? and if so do you know who we would need to contact to make any future arrangements.

An intriguing question indeed. I asked my friend Marie, one of the founders of the Friends of Pere-Lachaise,  if such a thing was possible.  This was her reply:

Unfortunately, the rules to be buried in a Paris cemetery are rather strict: people may be buried in one of these cemeteries if (and only if) they die in the French capital city or if they lived there. Being buried in Pere-Lachaise is even more difficult nowadays as there is a waiting list: very few plots are available.However, I suppose ashes could be scattered in PL's Garden of Remembrance. You should write to the following address:

(photo above: Lewin family in division 93, directly across from Oscar Wilde's well-visited gravesite in division 89. Curiously, most people don't even notice this dramatic bit of humanity.)
Posted by Steve Soper at 1:13 PM

I recently visited Pere Lachaise and loved it! I was wondering if the bodies are interred below the vaults and, in the case of family vaults, simply stacked on top of each other. Can anyone provide an answer?